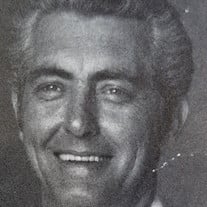 Jon W. Campbell passed away from cancer at his home on April 19, 2018. He was retired from the Jackson Fire Department as the Deputy Chief, was an instructor at the State Fire Academy, worked for Exxon Mobile and was fire commissioner for the Lamar County Fire Department for many years. Mr. Campbell was a long time member of Taloway Methodist Church. He was preceded in death by his parents, Bill and Lila Campbell; brothers, Billy Campbell and Bobby Campbell; and his wife, Rheta Campbell. He is survived by his wife of 26 years, Janet Campbell; three sons, Jon David and Colleen Campbell, Chris and Leigh Anne Campbell, and Scott and Cindy Campbell all of Brandon, MS; one daughter, Cammy Campbell of Ocean Springs, MS; one stepson, Mike and Rhetta McGarrah of Purvis, MS; one stepdaughter, Christy and Randy Pratt of Brandon, MS; fourteen grandchildren and ten great-grandchildren. There will be a visitation service at Hulett-Winstead Funeral Home Purvis Chapel on Saturday, April 21, 5:00-7:00 PM. A visitation service will also be held at Chancellor Funeral Home in Byram on Monday, April 23 from 11:00 AM-1:00 PM with the funeral service starting at 1:00 PM. The burial will follow at Lakewood South Cemetery on McCleur Road in Jackson. In lieu of flowers, the family asks that donations be made in Mr. Campbell's name to any of the following organizations; St. Jude Children's Hospital, Blair E. Batson Children's Hospital, The Cancer Foundation, The Heart Association, Talowah Methodist Church, or Purvis Methodist Church.
To order memorial trees or send flowers to the family in memory of Mr. Jon Campbell, please visit our flower store.