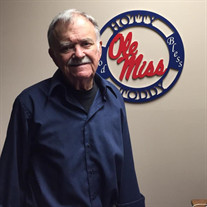 Mr. Joe Don Robinson, Sr., 80, passed away at his home on Friday, July 30, 2021. There will be a graveside service at 3:15 pm, Monday August 2, 2021 at Lakewood South Memorial Park in Jackson, MS Joe was born April 3, 1941 in Prentiss, MS to Victor and Tina Herrington Robinson. He was the founder and owner of Robinson Electrical Company and retired as Electrical Inspector for the City of Jackson. He was a charter member of Byram Assembly of God, where he served faithfully as Deacon and a member of the Board. Mr. Robinson, a veteran of the United States Air Force, was a gun collector and an avid fisherman. He loved his dogs, Bear, Rupert, Snaky, Terror, Mookie, Pooh and Deena. He is preceded in death by his parents; sisters, Myrtle Polk, Kitty Thrasher; brothers, Charles, Butch and Shariod Robinson. Those left to cherish his memory are his wife of 57 years, Kathy Robinson of Jackson; sons, Joe Don Robinson, Jr. of Jackson, Jon Lyndon Robinson of Florence and sister, Sue Bell of Atlanta, GA.

The family of Joe Don Robinson Sr. created this Life Tributes page to make it easy to share your memories.