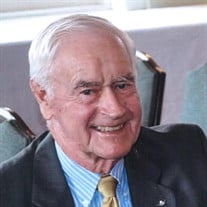 Mr. Joe Ted Pope passed away on April 8, 2021. There will be a visitation on Monday, April 12, 2021 from 12:00 PM until 2:00 PM at Lakeshore Church in Byram, MS. A funeral service will follow the visitation at 2:00 PM. Mr. Pope was born in his grandmother's home in the small northwestern Tennessee town of Paris. He was the oldest of 4 children and attended public schools in Tennessee and Arkansas. His father was a tool and die maker who loved all things mechanical and electrical. His mother went to college to be an English teacher but instead became a homemaker so she insisted her children pay close attention to the subject she did not get to teach. In October of 1941 he had his first flight in an old yellow fabric covered Stinson airplane flown by a pilot in riding boots and wearing a brown uniform. This was just two months before the Japanese attack on Pearl Harbor. In a matter of months after the Pearl Harbor attack aircraft now filled the skies over America. Men and women wearing uniforms were now seen in every town, train station and store. Joe knew he had to follow some profession that involved flying and the military. He had a fascination for anything scientific, kept a collection of Popular Mechanics magazines, built old fashioned balsa wood and paper airplane models, belonged to a history club and wrote the school newspaper. In high school he participated in sports but enjoyed little success in baseball and football but found he had a talent as a pole vaulter on the track team. He wished the fiberglass poles poles used today had been available in the 1950s when bamboo was considered high tech. After high school he entered Memphis State College, when it had less than 3000 students enrolled. His dreams of aviation came true as a member of the Air Force ROTC program. Every spare minute he could find away from the other required subjects he spent in the ROTC department. All the military services had aviation opportunities in the year after the Korean conflict had ended. Joe selected the Army's Reserve Officer enlistment program and was commissioned a second lieutenant of Artillery in September of 1957. He later became a regular army officer and served 31 years. He is a Master Army Aviation and has earned degrees in aviation management and organizational planning. He is a graduate of the Field Artillery Officer basic and advance courses; the academic instructor's school, the U.S. Army Officer's fixed wing flight course, the officer's rotary wing helicopter course, the Army fixed wing flight instructor's course, the aviation observation and management course, the aviation defense intelligence officer course. He is a graduate of the U.S. Army Command and General Staff College at Fort Leavenworth, Kansas. Those left to cherish his memories include: his wife of 61 years, Betty Pope of Terry; son, Jeff (Susan) Pope of Terry; grandchildren, Tyler Pope of Terry, Jessica (Ryan) Buckley of Loxley, AL , and Sarah Daniel) Dykes of Memphis, TN; Sister, Betty Jean Crosby of Tyler, TX; Brothers, James Lewis Pope of Columbia, TN and Michael Neal Pope of Memphis, TN; and an aunt, Helen Rainey of Illinois.
To order memorial trees or send flowers to the family in memory of Lt. Col. Joe Ted Pope US Army Ret., please visit our flower store.