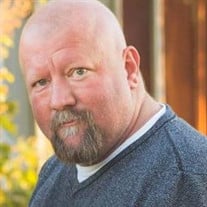 Joe Lacey, 44, passed into the arms of Jesus Monday, July 9, 2018 at his home in Florence after a long, courageous battle with cancer. Visitation will be Wednesday, July 11th from 5:00 – 8:00 p.m. and Thursday, July 12th from 10:00 a.m. until the 11:00 a.m. funeral service at Chancellor Funeral Home in Florence. Burial will follow at Glenwood Memorial Park in Richland. A life-long resident of Florence, Joe was married to his best friend, Angie, for 24 years and together they raised their son, Caden. He owned and operated his own business, Enviro-Flo which began as a dream where he designed and created a wastewater system. He was also a third-generation owner, along with his brother, Michael, of Lacey’s Digging Service. He was the first in his family to receive a 4-year college degree, earning a Biology Degree from Mississippi College in 2005. In addition to his many accomplishments, Joe was also known for always having the nicest pair of Converse in the room. Joe would open his home to anyone who needed a place to stay. As one of the founders of the Spirit Riders, Joe’s legacy was built upon serving others, and it was through that mindset that the Reggie Puckett Jr Foundation was formed and became a large part of his legacy. Joe Lacey didn’t love a little, he loved a lot! As his granddaddy used to say, Joe loved with all of his heart and a chunk of his liver. Let that sink in a minute. A man with cancer was putting others first just days before he went home. He selflessly worked to raise money for those in need. His motto was always, “Angie and I have been blessed, and it’s our duty to bless others”. Joe was preceded in death by his twins, Baby Joe A and Baby Joe B Lacey; mother-in-law, Brenda Lester, Granddaddy and Granny, Billy and Geneva Tucker; and Mamaw, Aleene Robinson. He is survived by his wife, Angie Lacey and their son, Caden Lacey of Florence; father, William “Billy” Lacey of Puckett; mother, Mary Dail Lacey of Florence; brother, Michael Lacey and his wife Vallerie Lacey of Brandon; sisters, Mikaela Harris and her husband Johnathan of Forest and Angel Lacey of Puckett; uncle, Billy Tucker (more like brothers) and his wife, Brandie Tucker; father-in-law, Jerry Lester of Florence; brother-in-law, Bryan Hopson and his wife, Alison of Florence; Papaw, Joe William Lacey and his wife, Carol of Florence; and numerous extended family members and friends. In lieu of flowers, the family request memorials be made to the Reggie Puckett, Jr. Foundation. 235 Flowood Drive Flowood, MS 39232. Online guestbook may be signed at www.chancellorfuneralhome.com.

The family of Mr. Joe William Lacey created this Life Tributes page to make it easy to share your memories.