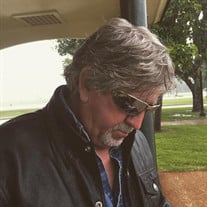 Mr. James Carr King died peacefully at the home of Mr. and Mrs. Jimmy Lee, his In-laws, on Friday, October 15, 2021 in Pearl, MS at the age of 64. He is preceded in death by his parents, Robert L. King and Desiree Chandler King; baby brother, Robert L. King II; and aunt, Marynell King. Mr. King is survived by his wife, Jodi Lee King and sweet Harley, his riding pet companion; sister, Deborah Hydrick and her spouse, Mike Hydrick; children from previous marriage to Julie King Roberts, Jamie King Meggs and her spouse Jeff Meggs, SGM Joshua Carr King and his spouse Christy King, and Jana King Alford and her spouse John Paul Alford; daughter of Jodi King, Jessica Malone; father-in- law, Jim Lee; mother-in-law and caregiver, Joyce Lee; and brother-in-law, Jeffrey Lee and his spouse, Carol Lee; and uncles, Gerald King and uncle Ben Chipley. He was a blessed grandfather to Jerod Meggs, Josie Meggs, Sawyer Alford, Mobley Alford, Winnie Alford, Jonas King, Cole King, Adalynn King and Trey Landry; a blessed uncle to Michael Hydrick and his spouse Jesicia, Whitney Quarles and her spouse Jacob, and Ryan Hydrick; as well as great nieces and nephews, Hayden Hydrick, Hannah Claire Hydrick, Chandler Quarles, Charlie Quarles, Anna Ryan Quarles, Nicolos Hydrick, and Reagan Hydrick. James King was born on January 17, 1957 in Memphis, Tennessee to Robert and Desiree King. Moved back to the King family home in Mississippi in 1962 and attended Kosciusko public school before enlisting in the army in 1973. Jimmy was self-employed most of his life. His hobbies included riding his Harley motorcycle while traveling cross country. He had 12 states left to visit to see all 50 states. He loved watching Jerod and Josie play college baseball and softball. He loved all his family, friends and loved leaving his marks on everyone that he met. His children, family and friends remember him as a kind, gentle, patient, and loving man who would give the shirt off his back to anyone who needed it. Jimmy was an avid hunter and fisherman. His favorite hobby was riding his motorcycle with the wind in his face with his two loved ones, Jodi and Harley. At Jimmy’s request, there will not be a funeral or memorial service. In his final days and hours, he was surrounded by loved ones. In lieu of flowers, Jimmy requested that contributions be made to the Wounded Warriors Project. The family would like to thank professional caregivers: UMMC Cancer Institute, Dr. Kelly Wilkison, oncologist, and Sta-Home Hospice, Blake, Meagan, and Rick for their efforts, care and dedication. The services are in the care of Chancellor Funeral Home in Florence, MS

Mr. James Carr King died peacefully at the home of Mr. and Mrs. Jimmy Lee, his In-laws, on Friday, October 15, 2021 in Pearl, MS at the age of 64. He is preceded in death by his parents, Robert L. King and Desiree Chandler King; baby brother,... View Obituary & Service Information

The family of Mr. Jimmy Carr King created this Life Tributes page to make it easy to share your memories.

Mr. James Carr King died peacefully at the home of Mr. and Mrs....