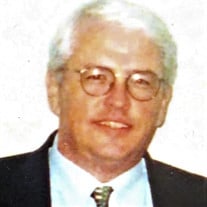 Jeffrey “Jeff” Allan Dickson, age 67, of Florence, MS, unexpectantly went home to be with his Lord and Savior on Friday morning, February 26, 2021. He leaves his family at peace knowing he is in heaven. Jeff was born to the late James David Dickson, Jr. and Lillian Johnston Dickson in Mississippi City, MS on September 15, 1953. He moved to Jackson, MS where he was a long-time resident. Jeff graduated from Wingfield High School in 1971. In 1975, he began his career with Monroe Shocks as an outside salesman in the automotive parts industry, going on to have a successful long-term career with Wix Filters and later retiring in May 2020 from Fleet Pride Heavy Truck parts. In 1968, he met the love of his life, Jennifer Steinwinder Dickson, at Whitten Middle School in Jackson, MS, whom he married on November 30, 1973. They had been married for 47 years. The Lord blessed Jeff and Jennifer; and on May 07, 1975, they had their first child, Melanie Dawn and four years later, on June 14, 1979, Daniel Glen was born. From the very beginning, Jeff dedicated his children to God and to encourage and lead them to salvation. Jeff helped raise his children with patience, discipline, and humility. He taught them many things and often took them on family vacations that created memories for them to hold on to. Jeff was kind, gentle, and soft-spoken, and always had time to talk and answer a question. He was the most selfless person you would ever meet. Awards and recognition for a job well done did not mean much to Jeff—what meant the most to him was knowing that someone surrender their life and accept Jesus as their Lord and Savior. Jeff always put Christ first in his life and this devotion to Christ is also shared by his wife and children. His favorite Bible verse, which he lived by, was Mark 16:15: “And he said unto them, ‘Go into all the world and preach the gospel to every creature’”. He may not have traveled the world spreading the word, but he spread the word to everyone he could here in his community. Jeff not only spread the word verbally, but lived it everyday in his life. He was a long-time member of Lakeshore Congregational Methodist Church where he served many years as Lay Leader, Sunday School teacher, and various other areas. Jeff enjoyed fishing and spending time with his four grandchildren—oftentimes, you could find him fishing with them. He had a special bond with each one and they were his pride and joy. He was the most loving grandfather who spent many afternoons playing cars, trucks, and trains with his three grandsons and even played tea party and beauty shop with his granddaughter. When Jeff wasn’t fishing or spending time with the grandchildren, he could often be found in his recliner asleep, but if you asked him, he wasn’t asleep and he heard everything you said. He also could be found shopping the clearance sections at every store he walked in. He loved a good sale. Jeff also enjoyed making daily trips to Kroger, no doubt browsing the clearance section. Many times, you could find Jeff stopping on the side of the road, picking up his next find, which was usually a slide, playhouse, or bike just in case his grandchildren needed the extra slide, playhouse, or bike. Jeff is survived by his wife, Jennifer Steinwinder Dickson; son, Daniel Dickson (Nicole); sister, Diana Snell (Steve); brother, David Dickson (Judy); brother-in-law, Phillip Steinwinder (Connie); his grandchildren, Mason Manning, Parker Manning, Cash Dickson, and Stella Cate Dickson; nieces and nephew, Kimberley Thiel, Amy Quarles, Angela Traylor, Johnny Bass, Jr., Nikki Bass, and April Wilson. He is preceded in death by his father, James David Dickson, Jr. and mother, Lillian Johnson Dickson; daughter, Melanie Dawn Manning; sister, Patricia Dickson Bass; and his loving father-in-law, James Glen Steinwinder and mother-in-law, Stella Boozer Steinwinder. A visitation will be held on Tuesday, March 02, 2021 at 12:00 p.m. with a service starting at 2:00 p.m. at Lakeshore United Methodist Church in Byram, MS. A graveside will follow at Lakewood South in Jackson, MS. Pallbearers include Jimmy Bradley, Glenn Goodwin, Peter Stone, Ty Martin, Grayson Manning, and Grant Giles. In lieu of flowers, donations may be made to Lakeshore Congregational Youth Group.

Jeffrey &#8220;Jeff&#8221; Allan Dickson, age 67, of Florence, MS, unexpectantly went home to be with his Lord and Savior on Friday morning, February 26, 2021. He leaves his family at peace knowing he is in heaven. Jeff was born to the late... View Obituary & Service Information

The family of Mr. Jeff Allan Dickson created this Life Tributes page to make it easy to share your memories.