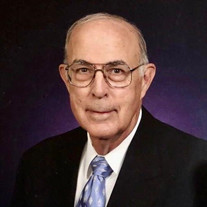 James Miller “Sonny” May Jr. of Florence, MS passed away at UMMC on February 1, 2020 at the age of 91. He was born May 8, 1928 in Jackson, MS to J.M.May Sr. and Gladys Patterson May. Services will be held this Saturday, February 8, 2020 at Chancellor Funeral Home in Florence. Visitation will be 9am to 11am, service at 11am with interment to follow at the Florence Cemetery. Sonny graduated from Florence High School in 1946 and attended Hinds Junior College for two years before transferring to Mississippi State University where he graduated with a Bachelor of Science in Agriculture in 1950. He was drafted into the US Army during the Korean War and served two years at Fort Jackson, SC. In 1953 Sonny returned home and operated a Gulf service station with his father. A year later he met Anita Hardee who was attending Mississippi College, and after they married on 9/12/1954, he moved her to Florence where they lived for the next 65 years and raised 4 children. The following year Sonny signed on with the US Post Office beginning a 28 year career that started as a mail carrier (1955-1963) and then Post Master (1964-1983.) After retirement he, like his father before him, served 2 terms as Florence Mayor, 1989-1997. Sonny truly loved the Florence community that he moved to when he was 4 years old and called home for the next 87 years. He was a member of FBC Florence since 1952 and served as deacon from 1983-2004, a member of the Lions Club and president 1982-1983, Scout Master of Troup 85 in Florence from 1952-1976, co-founder and member of the Florence Riding Club, and a long-standing member of the Masons. His many awards include the 1976 Silver Beaver Award for 25 years of service to Troop 85, the 1995 Community Service Award by VFW Post 5048, and the State of Mississippi House Resolution #40 commending the life and legacy of Sonny May dated 2009. Sonny was preceded in death by his parents, his sisters Miriam Cooper and Rita Simmons, and his daughter Sharron May. He is survived by his wife Anita May, three children Mindy May (David) Costello of Kaufman TX, Isaac (Kathy) May of Star MS, Dr. Byron (Leslie) May of Jacksonville FL, and seven grandchildren. The family would like to thank Beth Scarbrough and the Villa South staff for their many years of support and loving kindness. In lieu of flowers, please donate to the Cure Alzheimer’s Fund at cureALZ.org to honor Sonny’s wife Anita whom he loved dearly for 65 years.

The family of Mr. James "Sonny" Miller May Jr. created this Life Tributes page to make it easy to share your memories.

James Miller “Sonny” May Jr. of Florence, MS passed away at UMMC...