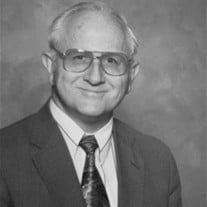 Rev. James Neron Smith: Christ Follower, Faithful Steward Neron Smith, age 82, resident of Raymond, MS, met his Lord and Savior Jesus Christ face to face on September 29, 2019. Visitation will be 9:30-11:00 a.m. Oct 10, 2019, with service to follow in the chapel at 11:00 a.m. of Chancellor Funeral Home, 7225 S. Siwell Rd, Byram, MS. Interment will take place at Lakewood Memorial Park, Clinton. Neron was born in 1937 in Hammond, LA to John Nolan and Zelma F. Smith He was raised on a family farm in Magnolia, MS, graduating from Magnolia HS in 1955, Mississippi College in 1959, and New Orleans Baptist Theological Seminary in 1961. Married to his childhood sweetheart, Carolyn, on August 22, 1961, this year they celebrated their 58th Anniversary. Throughout his ministerial career, Neron served churches as Minister of Education in Florida, Louisiana, Georgia, and Mississippi. The last 22 years of his working career were spent serving churches throughout Mississippi at the Mississippi Baptist Convention Board in the areas of Church Building Consultant and Missions and Ministry Strategy and Development. Neron committed his life to Christ at the age of 12, and in 1954 “vowed” to follow the Lord, doing “Anything….Anytime….Anywhere….Even (living in) a tent on the other side of the world.” He enjoyed music in school and college, singing throughout his life, a passionate reader, especially of westerns and history, and reading the newspaper Comic Strips, a trait he inherited from his Dad. He loved putting puzzles together and camping with friends in the Metro Rambling Sam Camping Club. Much of his adult life revolved around the Christian fellowship known as Oak Forest Baptist Church in Jackson, serving in numerous capacities including minister, deacon, Sunday School teacher, and choir member, in addition to service on multiple committees. He loved to study and teach from God’s Word and truly enjoyed small group Bible Study, especially with the men in his Sunday School class. He was passionate about Southern Baptist Life, defending the principles that make up Baptist distinctives. Neron was preceded in death by his parents, John Nolan and Zelma F. Smith. He is survived by the love of his life, his wife Carolyn, son, Jeffrey (Judy) of Raymond, and daughter, Jan Williams (Mike) of Terry, grandchildren: Nolan Smith (Christa) of Starkville, Leah Bell (Corey) of Picayune, Sean Williams of Terry, Maggie Williams of Terry, and Lydia Smith of Riverside, CA, and great-grandchild, Jacey Carol Powe. He is also survived by his brother, Robert Howell Smith of Baton Rouge, LA, sister, Karen Elizabeth Lawrence of Summit, MS, brother-in-law and sister-in-law, Donald and Shirley Dick of Knoxville, TN, and many nieces and nephews. In lieu of flowers, please make Memorial donations to St. Jude Children’s Research Hospital, Memphis, TN https://www.stjude.org/donate/donate-to-st-jude.html?sc_icid=wtg-lz-donatenow Donate by Phone: (800) 805-5856 By Mail: 501 St Jude Place, Memphis, TN 38105

The family of Rev. James "Neron" Smith created this Life Tributes page to make it easy to share your memories.