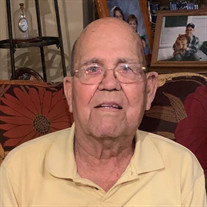 James Aaron Carpenter, Jr. passed away on Sunday, June 20, 2021 at his home in Terry, MS. He was 88 years old. Visitation will be Tuesday, June 22, 2021 from 6:00 p.m.—8:00 p.m. at Chancellor Funeral Home in Byram and again Wednesday, June 23, 2021 from 10:00 a.m. until the hour of the service at 11:00 a.m. Interment will follow at Lakewood Memorial Park on Clinton Blvd. in Jackson, MS. James was born on January 12, 1933 to James Carpenter, Sr. and Louise Dickard Carpenter in Hinds County, MS. After serving in the US Navy, Mr. Carpenter was employed as an electrician, retiring from IBEW Local #480. He also enjoyed being a Sports Coach in Little League Baseball and was a member of Masonic Lodge #600 in Byram, MS. In his spare time, he enjoyed fishing, golfing, listening to country gospel music, traveling, and working in his yard. Most of all, he loved his family, especially his grandchildren and great-grandchildren. James was a friend to many and will be missed. Along with his parents, he was preceded in death by his wife of 58 years, Shirley Ann Carpenter, who passed away in 2017; son, Alan Wade Carpenter, who passed away in 1985; and brother, John Carpenter. He is survived by his son, James (Camellia) Carpenter of Pelahatchie; daughter, Cindy (Dale) Watts of Mobile, AL; grandchildren, Lindsey (Jeremy) Goddard, Olivia Watts, and Thomas Watts; and great-grandchildren, Millie and Braxton Goddard.

The family of Mr. James Aaron Carpenter Jr. created this Life Tributes page to make it easy to share your memories.