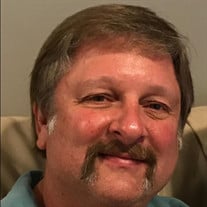 James Clinton Burks, 60, of Terry, passed away on Friday, May 7th, 2021. Visitation is scheduled for Tuesday, May 11, 2021, from 11:00 until 1:00 at Chancellor Funeral Home in Byram with funeral services to immediately follow at 1:00 p.m. Interment will be held at Lakewood South Cemetery. James was born on January 10, 1961 to Odell and Linda Burks in Meridian, Mississippi. He attended high school at Bass Memorial Academy in Lumberton, MS. James worked for CDE Integrated Systems of Jackson, Mississippi for 25 years. He also owned his own telecommunications business, Altec Systems, for over 25 years. But if you asked him, he would say simply “I’m a phone man.” He married Kathy Lynn Burks on December 31, 2015. He was preceded in death by his mother, Linda Sue Burks, and sister, Jena Ann Berrong. He is survived by his wife, Kathy Lynn Burks of Terry; daughter, Natalie LaQue Balderas of Sparks, NV; daughter, Christi (Jim) Delaughter of Brandon, MS; daughter, Latacia (Greg) Winter of Walnut, MS; son, Adam (Danielle) Burks of Madison, MS; brother, Michael Odell Burks of Paducah, KY; father, Clinton Odell Burks of Pearl, MS; grandchildren, Alex Sudduth, Daisy Delaughter, Emma Winter, and Lily Winter; and nieces, Leigh Ann Delaughter, and Allison Cotten. James loved his wife, his kids, and his grandkids. He was a proud father, and his kids want you to know they were and are so, so proud of him. James was a kind, loving husband to Kathy, who cannot describe how happy living with him was. He was the kind of man who woke up early, singing and vacuuming at 5 o’clock in the morning. On Saturdays he woke up first too, making both their coffees before they watched Hallmark movies all morning. On Sundays it was football and NASCAR racing. And speaking of racing, he was the first one to bed, laughing and yelling “Guess who’s in bed first and I’m on your pillow!” James was a faithful, loving, and playful father. He loved watching and playing sports, often skipping class in high school to do just that: play basketball. Even as an adult he continued to play basketball and tennis, but he really took fun and playing with his kids to the next level. When we say he loved watching and playing sports, we mean that we will never forget how he bought a real tomahawk, waiving it over his head to do the “Tomahawk Chop” from his living room during the Braves’ games. We mean how he coached Adam’s baseball teams, the twins’ softball teams, and faithfully attended and enjoyed every basketball game, tennis match, and track meet of his kids. When we say he loved the Saints, we mean that we will never forget our family van, proudly painted black and gold for the Saints--and this was in the 90s, when we all know the Saints were terrible. This love for the Saints eventually gave way in later years to the best float in the Jackson St. Paddy’s Day parade: a Saints float – you couldn’t miss it – or him and his stellar Fu Manchu mustache. He and Kathy loved going down to the Coast and New Orleans just to pick out the beads and the other special items they would throw. When we say he loved toys, from cars and motorcycles to gadgets, we mean that we will never forget the Christmas morning he woke us up, revving the engine of the kids’ new dirt bike, popping wheelies and riding it down the hall of our bedrooms and all throughout the house. Or the countless boating days over the years, fishing, skiing and tubing. James had unconditional love for his kids and unmatched joy in his grandkids. Whenever he was anticipating a visit to or from his grandkids, he would say all week “I need some baby kisses” or “I need my pug pugs” as he called it. James loved to joke with people, both verbally and practically—and he was quite clever. We will keep some of those stories for ourselves. James loved to shop and loved to eat, and he loved to shop for things to eat. What we mean is, he didn’t just buy one container of BBQ pringles, but 10 at a time; how he bought a separate deep freezer just for his boiled peanuts and had a separate refrigerator out in the garage just for his drinks; how he bought commercial grade pizza bags from Domino’s to keep his pizza hot; and how he referred to ice cream as “his medicine.” He loved to fish and he loved, loved the water—whether it was the ocean where he and Kathy vacationed in the summers, the reservoir frequented over all the years with the kids, both young and when they were adults, or the lake in front of his house. We will never forget the fishing days and countless boating days, skiing, tubing, jet skiing. James was not a perfect man as his impatience with projects manifested in a comical but intense temper. But never with people. He was so kind to all, never saying a bad word about anyone. James was a loving husband, father, grandfather, son, brother, uncle and friend. He will be forever loved and forever missed by all.

James Clinton Burks, 60, of Terry, passed away on Friday, May 7th, 2021. Visitation is scheduled for Tuesday, May 11, 2021, from 11:00 until 1:00 at Chancellor Funeral Home in Byram with funeral services to immediately follow at 1:00 p.m. Interment... View Obituary & Service Information

The family of Mr. James Burks created this Life Tributes page to make it easy to share your memories.

James Clinton Burks, 60, of Terry, passed away on Friday, May...