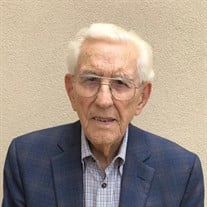 Hershel A. Hegwood, 97, passed from this earth into his savior's arms Tuesday, August 11, 2020 at his home in Terry, Ms. His wife, daughter, son in law, grandson and granddaughter were with him. Visitation will be Friday, August 14, 2020 at Country Woods Baptist Church from 10:00 a.m. until the hour of the service at 11:00 a.m. Interment will follow at Lakewood Memorial Park. He was born to Leavi and Gertrude Hegwood on February 01,1923 near Forest, Ms. He lived there until he left to serve his country in World War II in the 11th Airborne Division Paratrooper Infantry where he was injured and received a Purple Heart for his service. He was a part of the battles of Leyte and Luzon. Mr. Hegwood is a member of the National Purple Heart of Honor and the American Legion. He was an American hero. After returning home, he met his wife, Pearline Pope, and they were married in 1951 in their pastor's home. In June, they recently celebrated 69 years of marriage, and they have been a godly example of commitment and love to each other. He was a loving husband. Soon Mr. Hegwood had the opportunity to work as a salesman for Standard Coffee Company and Rochester Midland Chemical Company. He also worked in his community, his neighborhood, and his church. He was a hard worker. His passion was his church. He was a member of the family of God and a faithful member of Van Winkle Baptist Church serving as a deacon and involved in the life of the church. The bus ministry was a favorite of his where he brought unchurched children from various neighborhoods to church. He also took care of the widows in the church and financially helped others in need. When Van Winkle Baptist Church closed he became a member of Country Woods Baptist Church. He was a godly man. Mr. Hegwood's wife and family were his priorities. He loved hunting and fishing with his grandson and great grandchildren and spending time with his family. He consistently supported his grandchildren in sports and invested his time teaching them life skills. He unselfishly gave to help provide for them. He was his family's treasure! He is survived by his wife, Pearline Hegwood; daughter, Sharron (Barry) Willoughby; two grandchildren, Matt (Ginny) Willoughby and Maribeth (David) McMillan; and six great grandchildren, Harper, Clayton, Hayes, and Lewis Willoughby and Jake and Brett McMillan. "Well done my good and faithful servant." Matthew 25:21 "Therefore, since we are surrounded by so great a cloud of witnesses, let us lay aside every weight and sin which clings so closely and let us run with all endurance the race that is set before us, looking to Jesus, the founder and perfecter of our faith." Hebrews 12:1 In lieu of flowers, contributions can be made to Country Woods Baptist Church or woundedwarriorproject.org

Hershel A. Hegwood, 97, passed from this earth into his savior's arms Tuesday, August 11, 2020 at his home in Terry, Ms. His wife, daughter, son in law, grandson and granddaughter were with him. Visitation will be Friday, August 14, 2020 at... View Obituary & Service Information

The family of Mr. Hershel Hegwood created this Life Tributes page to make it easy to share your memories.