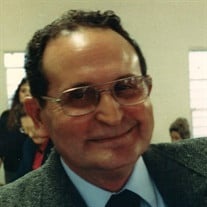 Henry Grady Phillips, 87, of Star died April 19 at Hospice Ministries in Ridgeland. He was surrounded by his family. His humor, integrity, and wise counsel touched many lives and will be greatly missed. Visitation will be from 1 p.m.-2 p.m. Sunday, April 22, at Wesleyanna United Methodist Church in Star. Services will begin at 2 p.m. at Wesleyanna. Burial will follow at Bethany Calhoun Cemetery on Cato Road near D’Lo. A retired civil engineer, Henry was born and raised in the Bethany Community near D’Lo. He was a graduate of Mendenhall High School and Mississippi State University. He served as an airman in the United States Air Force during the Korean Conflict. Henry was a member of Wesleyanna United Methodist Church, where in the past he had served as a choir member, Church Lay Leader, Chairman of the Board of Trustees, and Finance Committee Chair. He also taught an adult Sunday school class for over 20 years. Music was a very important part of Henry's life. He especially enjoyed listening to bluegrass music, playing his guitar, and singing in the church choir. He loved to travel with his wife, and he loved to hunt and fish. He enjoyed a funny greeting card more than a fancy present, and he knew all about birds. According to his grandchildren, he could identify them correctly every single time. Henry was especially proud of his large family and his 65-year marriage. Never was his devotion to his wife better exemplified than when she was recuperating in a swing bed facility at the age of 85 from a bad fall. He never forgot to water an orchid which, to all appearances, had bloomed-out long ago. When his wife returned home, she didn’t see the orchid in its usual spot and figured it had died and been thrown away. In the course of the day, imagine her surprise and delight to discover it sitting on a sunny window sill in a back bedroom with three large red blooms. Henry is preceded in death by his father, James Grady Phillips; his mother, Myrtle Smith Phillips; his sister Merle Spann; and his sister, Clara Watkins. He is survived by his wife, Patsy Loflin Phillips; sister, Flora McDonald (Mitchell), sister; Cora Hansen; brother, Rev. George Phillips; daughter, Glynda Phillips; son, Dennis Phillips; daughter, Nancy Phillips; son, Milton Phillips (Mechelle); and daughter, Tina Eldridge; six grandchildren, Matthew Phillips (Kim); Katie Nations (Nick); Leigh Abernathy (Matt); Trey Eldridge (Megan); Brooke Phillips (Blake); Taylor Eldridge (Jericho); and seven great-grandchildren. In lieu of flowers, donations may be sent to Wesleyanna United Methodist Church, P. O. Box 13, Star, MS 39167 or to the Bethany Calhoun Cemetery Association, 3412 Cato Road, Braxton MS 39044.
To order memorial trees or send flowers to the family in memory of Mr. Henry Grady Phillips, please visit our flower store.