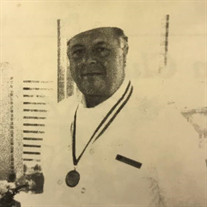 Henri Gaston van Goethem passed away Tuesday, December 22, 2020 while surrounded by his family at his home in Florence. Henri was born in Berlin, Germany in 1935, where he spent most of his childhood during the WWII years. After completing his cooking apprenticeship in Berlin, he served as an Entremetier and Saucier in Switzerland and for the Royal Air Force base in Berlin. After immigrating to Canada, he spent three years in Montreal before coming to the U.S. Over the past 50 years he has served as a Saucier, Sous Chef, and Executive Chef in various states including LA, NY, FL, OH, CA, and finally MS. The family moved to Florence in 1989 and he worked in Jackson as the Executive Chef at the University Club, Capital City Petroleum Club, and the Colonial and Deerfield Country Clubs. In 1990, Chef Henri earned the Bronze medal as a finalist representing MS at the American Seafood Challenge in New Orleans after competing against chefs from 33 other states. Chef Henri, again, represented MS in the National Pork Cookoff after winning first place in the Taste of Elegance Pork Cookoff. Additionally, he also participated in numerous events such as Taste of the Nation, which supported local charities such as the Community Stewpot, and contributed to a successful nationwide fundraising campaign to raise $1.3 million for charity. He also served at Governor Kirk Fordice’s Second Inaugural Ball in Jackson, MS. He is survived by Ingeborg, his wife of 56 years; daughter, Christine; son, Henri; and grandchildren, Lily and Liam. The van Goethem family wishes to especially thank the staff, nurses, and aides from MS HomeCare, Baptist Hospice, and private caregivers for all of the loving care and support they have given to Chef Henri and his family. In lieu of flowers, please send donations to Mississippi Animal Rescue League (lhttp://www.msarl.org) or American Diabetes Association (https://www.diabetes.org/donate). Online guestbook may be signed at www.chancellorfuneralhome.com.

Henri Gaston van Goethem passed away Tuesday, December 22, 2020 while surrounded by his family at his home in Florence. Henri was born in Berlin, Germany in 1935, where he spent most of his childhood during the WWII years. After completing... View Obituary & Service Information

The family of Chef Henri Gaston van Goethem created this Life Tributes page to make it easy to share your memories.