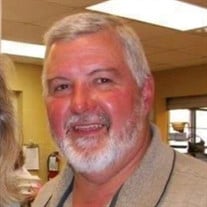 Keith Sims was born August 20, 1957 and left this world for his final heavenly resting place on Wednesday, February 24, 2021. The family will receive friends for visitation on Saturday, February 27th from 11:00 a.m. – 12:00 p.m. at Star Baptist Church. The funeral service will begin at 12:00 noon at the church with Bro. Vic Bowman officiating. Interment will immediately follow the service at Star Cemetery. Keith was born the son of Harold Lester and Peggy Sebren Sims. He had one brother and three sisters. After graduating from Rankin Academy, he served in the Army National Guard for 8 years. He was a great businessman who started his own paint sales business after retiring from Sherwin Williams. He was blessed to be married to the love of his life, Christie for 43 years. Keith enjoyed hunting, fishing and vacationing with family. He was a long-time member of Star Baptist Church. Keith had the biggest heart and was always doing for others. He lived his faith daily. Keith is preceded in death by his father, Harold Sims and his sister, Elaine Warren. Along with his devoted wife, Christie Sims, Keith is also survived by his daughters, Jill (Dustin) Pearson of Louisville and Ashley (Richard) Bullock of Florence; and son and best friend, Keith (April) Sims of Florence; and his mother, Peggy Sims of Harrisville. One of his greatest joys in life was being papaw to his 7 grandchildren, Trey, Hallie, and Kruz Sims, Dillon, Presley, and Parker Kate Bullock, and Daniel Pearson. He is also survived by his brother, Curt Sims of Braxton; 2 sisters, Annette Smith of Mantee and Val Langston of Harrisville; a host of nieces and nephews and his lifelong friend, Randy Chapman. Those serving as pallbearers include: Trey Sims, Curt Sims, Bryan Sims, Bradley, Sims, Larry Taylor, Randy Chapman, Daniel Chapman, David Chapman, Johnny Williams, and Tommy Bullard. His grandsons will serve as honorary pallbearers.

The family of Mr. Harold "Keith" Sims created this Life Tributes page to make it easy to share your memories.