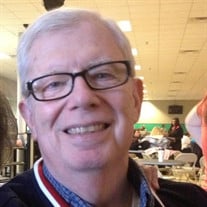 Hardy S. McKie, III, 76, passed away on June 10, 2020, surrounded by his family after fighting a long battle with Parkinson’s Disease. There will be a memorial service at a later late due to the pandemic. Hardy was born on December 5, 1943, and lived his childhood years in Pickens, MS. He lived in South Jackson for 27 years and in 1997, he moved to Florence. He graduated from Holmes Agricultural High School and then from Mississippi College with a degree in Chemistry. After teaching at Hardy Junior High School, he went on to work at the Mississippi Department of Transportation, where he retired after serving 30 years. He was a 32nd Degree Mason, a member of Leavell Woods United Methodist Church, and an Eagle Scout, also volunteering with the Boy Scout group at the church for many years. Hardy loved to watch television shows about science and history, and he loved to entertain his grandchildren with stories. He loved the Red Sox and lived for baseball season. Hardy is survived by his wife of 53 years, Eileen Shoemaker McKie; and his three daughters, Alison McKie Conville (Bryon), Heather McKie Hankins (Billy Wayne), and Jennifer McKie Carroll (Steve). He was a loving grandfather to his five grandchildren: Bryson Davis, Keely Davis, Daniel Conville, Michael Conville, and Miller Davis. He is also survived by his brother, Ed Hoover McKie. He is preceded in death by his parents, Hardy McKie, Jr. and Sara Zeigler McKie.

Hardy S. McKie, III, 76, passed away on June 10, 2020, surrounded by his family after fighting a long battle with Parkinson&#8217;s Disease. There will be a memorial service at a later late due to the pandemic. Hardy was born on December 5,... View Obituary & Service Information

The family of Mr. Hardy S. McKie III created this Life Tributes page to make it easy to share your memories.