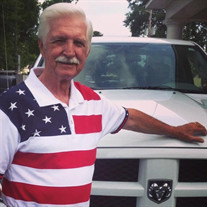 Hale Fariss Bomar passed into the arms of Jesus on Monday, March 28, 2022 at MS Baptist Medical Center in Jackson surrounded by his family. He was 84 years old. The family will receive friends for visitation on Friday, April 1st from 2:00 p.m. until the 4:00 p.m. Memorial Service at Briar Hill Baptist Church in Florence. Mr. Bomar was born January 4, 1938 to the late James Albert and Virginia Fariss Bomar in Lynchburg, VA where he was raised. He served his country proudly in the U.S. Air Force. His career in the communication industry began in Amherst, VA as an installer/repairman and worked his way up to President of Operations until his retirement in Cairo, GA. He retired at 62 years old and moved back to Lynchburg, VA to care for his ailing father until his passing. He returned to Florence, MS, where he would spend the rest of his life. He worked as a 911 dispatcher for Rankin County and Florence Police Department. He became Florence’s Animal Control Officer until he retired. He was an active member at Briar Hill Baptist Church where he served as a Deacon as well as in previous churches before moving to Florence. He served as an Alderman and eventually the Mayor of Florence where he played a strategic role in the development of Hemphill Park. He was a member of the Florence Lion’s Club where he served a member and President. He enjoyed golf, NASCAR, and southern Gospel music. Hale always had a smile and a positive attitude. He made sure that his family knew how much he loved them and how proud he was of them. Along with his parents, Mr. Bomar is also preceded in death by his brothers, James “Buddy” Bomar and Melford Wray Bomar. He is survived by his wife, Jewel Campbell Bomar of Florence; sons, Michael Bomar (Sheila) of North Carolina, Timothy Bomar (Sandra) of Gautier, MS, and Robert Bomar (Jodi) of Florence; daughter, Valerie Luckett (Stephen) of Florence; sister, Faye Thomas (Clarence) of Lynchburg, VA; 9 grandchildren, 20 great grandchildren and numerous nieces and nephews. In lieu of flowers, please donate to Gateway Rescue Mission in Jackson, MS in memory of Hale Bomar. (https://gatewaymission.org/donate)

Hale Fariss Bomar passed into the arms of Jesus on Monday, March 28, 2022 at MS Baptist Medical Center in Jackson surrounded by his family. He was 84 years old. The family will receive friends for visitation on Friday, April 1st from 2:00 p.m.... View Obituary & Service Information

It is with great sadness that we announce the passing of Hale F. Bomar on Monday, March 28, 2022

Hale Fariss Bomar passed into the arms of Jesus on Monday, March...