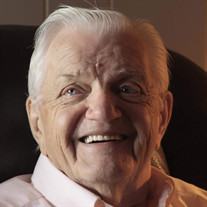 Our father, Frederick Dow Coffman, peacefully joined our mom in heaven on Wednesday September 22, 2021. He was born March 3, 1930 to Edwards Coffman and Lydia Partch. Dad was one of eight children - seven boys and one girl. They didn’t have much growing up; but family was everything to him and he taught his children the same. He joined the U S Navy and assisted in the occupation of Japan and saw combat during the Korean War. Dad earned medals and awards in the Navy and was honorably discharged in April 1951. He met our mom, Adria Munson, at a soda shop while they were attending West High School in Rockford, Illinois and stayed in touch with her while serving in the Navy. He was a tall, blonde, handsome thing with beautiful blue eyes and a star basketball player. They were both love-struck and married in 1952. They started their family while living in Rockford and in 1969 moved to Palatine, Illinois. They were such a great example of love and perseverance! We have been told by many people over the years what an inspiration they were to so many. This was true love. They were married 63 years when mom passed. He missed her so much! They had five children, Deborah Coffman, Corbin Brad Coffman, Jodi Gibbs (Bob), Scott F. Coffman (Nina) and Wendi Steadham (Ross). Dad, Mom, and Wendi moved to Jackson, Mississippi in 1976 where they lived until mom passed in 2015. His last years were spent living with Wendi and Ross in Brandon, MS. He was the best dad to his kids and the greatest Papa to all his 11 grandchildren and 24 great-grandchildren he loved so much. He never failed to have a drawer full of candy and ice cream in the freezer for his grandchildren and great-grandchildren to discover when they visited. We always felt love and support from him as he always reminded us of how proud he was of us. He took great joy in any of our accomplishments, large or small. If we had a problem, we could go to him for advice and inspiration knowing it would always be the best advice. He taught us to always work hard, be honest, kind, generous, and humble and to always love and protect our family. He was the smartest man we know! Dad worked with Gerber Baby Food, Beef A Roo, Dog ‘N Suds, Hudgey’s and Popeyes restaurants in executive positions. During all this, Dad was also a Dale Carnegie instructor. He always worked so hard for his family and encouraged us in all we did! He never missed a sporting event or performance. He also coached the boys in baseball and basketball. Dad constantly made things fun! His sense of humor was second to none! Because he was so tall, people would often ask him how tall he was and he would say, without fail, “6’4” 180 pounds of bouncing romance!” Music was a huge part of his life and subsequently ours. He loved to sing and entertain anyone and everyone. He had a beautiful voice and won several talent shows. Some of our best memories are of him singing and at family get-togethers, he and his brothers and sister singing. Dad’s sense of humor and easy-going attitude made anyone that met him, love him! He was beyond generous and loved to give! When he would be visiting with someone, he always wanted to hear all about them and would listen intently and never judge. In his later years, he discovered Facebook and enjoyed chatting on there with friends, grandchildren, and all his nieces and nephews who he adored! He was always excited when the phone rang and it was one of his brothers (Roger, Rodney, and Terry) calling. He called himself the patriarch of the Coffman family because he was the oldest (and the wisest). He was sharp as a tack even at 91 years old. He loved books and would read all the time even up to the very end. There will definitely be a void in our hearts and lives now, but his memories and lessons live on in all of us. We were truly blessed to have amazing parents and we take comfort in knowing he and our mother are dancing once again! In lieu of flowers, donations may be made to Hospice Ministries, 450 Towne Center Boulevard, Ridgeland, MS 39157 (https://hospiceministries.org/give-to-hospice-ministries/). A celebration of dad’s life will be held as determined by the family at a later date.

Our father, Frederick Dow Coffman, peacefully joined our mom in heaven on Wednesday September 22, 2021. He was born March 3, 1930 to Edwards Coffman and Lydia Partch. Dad was one of eight children - seven boys and one girl. They didn&#8217;t... View Obituary & Service Information

The family of Mr. Frederick Dow Coffman created this Life Tributes page to make it easy to share your memories.