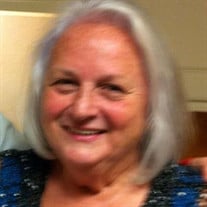 Mrs. Elva Glenda McBride Eubanks, 72, passed away Monday, February 17, 2020 at Merit Health Central in Jackson, MS. The family will receive friends for visitation on Thursday, February 20th from 5:00 – 8:00 p.m. and again on Friday, February 21st from 12:00 noon until the 2:00 p.m. funeral service at Chancellor Funeral Home in Florence. Burial will follow in the Garden of Memories cemetery. Mrs. Eubanks was born February 28, 1947 in Pickens, MS to the late Lester Gage and Dorothy McBride. She was raised in Holmes County by her grandmother, Dollie McBride “Momma”, and has been a resident of Florence since 1994. She was very active in conservative politics, volunteering a lot of her time to conservative causes in the State of MS, including the Pro-Life issue. She was also a member of DAR (Daughter of American Revolution), OCR (Order of the Confederate Rose), and UDC (United Daughters of the Confederacy). When she wasn’t volunteering, she loved saltwater fishing and enjoyed growing plants in her greenhouse. She was also a multi-craft artist who enjoyed painting, pottery and flea markets. Mrs. Eubanks is survived by her husband of 46 years, Larry Eubanks of Star; children, Dennis (Kelly) Collins of Slidell, LA, Michael Herrmann of Star, Lawrence (Stephanie) McBride Eubanks of Star, and Deanna Herrmann of Florence; grandchildren, Kimberly (Chris) Dement, Lawson McBride Eubanks, Clara Beth Herrmann, and Amree Herrmann; one great grandchild, Baileigh Breaux; brothers, Jim Gage of Madison, Allen Gage of Quitman, and Ward Fields of Edwards; and sisters, Jeanette Humphrey of Hurley, Sue Campbell of Pascagoula, Agnes Smith, and Debbie Pittman of Hammond, LA. In lieu of flowers, the family requests memorials be made to Pro Life Mississippi in her honor.

The family of Mrs. Elva Glenda McBride Eubanks created this Life Tributes page to make it easy to share your memories.