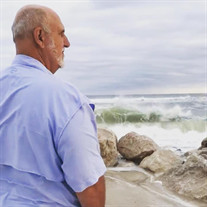 Eddie Smithson Courtney passed away at his home on 66 acres in the Monterey community on October 5th, 2021. He was 69 years young. During the last years of his life, Eddie battled courageously against cancer, characteristically shielding his loved ones from the depth of his pain. His ability to care for others even in the time of his own greatest need speaks to his steadfast selflessness. Eddie was born in 1951 in Raymond, Mississippi. The son of Indiana farm folk, his love of farming and carpentry came by him honestly. He graduated from Florence High School in 1970 and got right to work. Among other positions, working with his father as a welder at Westbrook Manufacturing was a natural fit for this creative craftsman. Later, he moved on to the profession that defined his career life, driving. He could tell you the highway to any destination without a map and was a pro at backing into parking spots—no matter how long it took. Eddie earned several awards for safe driving and being accident-free, although he felt these awards weren’t necessary. Just part of the job. He drove for a few different companies but his favorite was Brown Trucking. His driving career path eventually led him to the US Postal Service, where he worked his way up to the Driving Safety Instructor/Trainer and Accident Investigator for the State of Mississippi. In 1972, he married the love of his life and high school sweetheart, Alice Faye Jones at Good Hope Primitive Baptist Church. They began their life together in New Hebron where they welcomed their first child, Duane. After a move to Richland, their family grew by two with the addition of daughters, Megan and Kerri. In his role as father, Eddie established himself as comforter, fixer, advocate, and friend. He took his children on countless excursions to oceans and mountains—even if it meant carrying his youngest on his back up to Clingman’s Dome and placating his daughters with agonizing trips to outlet malls. In 2000, Eddie and Alice moved into their new home on family land in the Monterey community. Each day, Eddie worked diligently only to return home from night shift to work his hay fields and tend to his acres of corn, peas, okra and other delicacies. He prided himself on growing and putting up his crops for meals in the year ahead (especially sauerkraut—the funkier the better). Of the countless lessons he taught his children, one of the most important is how to most efficiently process corn (with an electric drill attachment, of course). 2016 brought to Eddie retirement from the US Postal Service and afforded him time to sip coffee with friends in his beloved shop and tend to his fields. In true Eddie fashion, he spent most of his new time off with his family and friends whether baling hay with Duane, building various projects for Megan, buying berry bushes for Kerri, side-of-the-road shopping with Don, driving around Callie on his “hutmobile”, or tending to his mother, Katherine’s lawn. In 2011, Eddie got a new “goog” to bounce on his knee with the birth of his granddaughter, Callie-Ann. He got another baby to occupy the other knee in 2018 with the arrival of granddaughter, Courtney. As their loyal Gramps, he never missed an opportunity to read a book, join them in play, teaching them about the taterwagon in a coming thunderstorm, or, most notably, make them giggle at his silly antics (building blocks make great eyeglasses!) Eddie will always be remembered as a loving father, heroic husband, and gregarious Gramps. He was a carpenter, a welder, a farmer, a tractor-enthusiast, and a fierce friend. He was our resident expert on plants, birds, and was a professional living room meteorologist. He never failed to come and pick up a stranded relative (even in the middle of the night) or make a repair to one of his children’s homes. He never missed the opportunity to talk to a stranger about a tractor. He never turned down a cup of coffee; not at the bank, the hardware store, parts house, the car dealership, or on a porch. (cue bluegrass music) He will be celebrated with a visitation on Thursday, October 7th, 5:00-8:00pm and Friday, October 8th at 10:00am at Chancellor Funeral Home. Funeral services will take place at 11:00am on Friday with burial following at Briar Hill Cemetery. In keeping with his passion for farming and agriculture, he would be honored with your donation to the National Future Farmers of America.

Eddie Smithson Courtney passed away at his home on 66 acres in the Monterey community on October 5th, 2021. He was 69 years young. During the last years of his life, Eddie battled courageously against cancer, characteristically shielding his... View Obituary & Service Information

The family of Mr. Eddie Smithson Courtney created this Life Tributes page to make it easy to share your memories.

Eddie Smithson Courtney passed away at his home on 66 acres in...