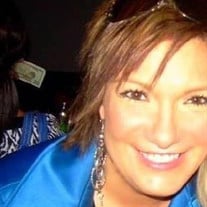 Dynnea Edwards, 47, passed away Wednesday, January 16, 2019 at her home in Crystal Springs. The family will receive friends for visitation on Thursday, January 24, 2019 from 12:00 p.m. until the 2:00 p.m. Memorial Service at Chancellor Funeral Home in Florence. Burial of cremains will follow in the Garden of Memories. Dynnea was born on April 15, 1971 in Yazoo City, MS to Terry Frazier Edwards and Dorthy Irene Hodges Edwards. She spent her childhood in Ebenezer, MS and eventually moved to Durant where she graduated from High School. She was also a graduate of Hinds Community College, where she received her Paralegal Degree and later, her Barber license. Dynnea worked as a stylist at TrendyYou Salon in Ridgeland with her sister, but she was probably most known for being a bartender. She began bartending at “The Dock” and continued for many years at several different establishments, eventually earning the Bartender of the Year award in 2004 from the Jackson Free Press. Later in her life, Dynnea became an animal rescue advocate. She was very passionate and active in helping rescue animals in many veterinarian’s offices and shelters. Dynnea loved her family and extended family so if you were a friend to her, you became her family. She is survived by her father, Terry Edwards (Linda) of Crystal Springs, MS; her mother, Dorthy Hodges Edwards of Newman, GA; her brothers, Terry Edwards, Jr. of Newman, GA, Tim Edwards (Veronica Baughman) Brandon, MS and Preston Edwards of Crystal Springs, MS; her sisters, MeLIsa Edwards of Kosciusko, MS and Sarah Jackson (Robby) of Brandon, MS; her nieces, Arianna Edwards, Hailie Shelton, Breanna Turnage, Kaitlyn Turnage, and Gabby Murillo; nephews, Jacob Palmer Hodges Edwards and Roman Sebastian Edwards; uncle, Karl Edwards of Lexington, MS; Aunt and Uncles, Gail an Marvin Graham of Ethel, MS and Paul and Kathy Edwards of Pickens, MS; many additional extended family and too many friends to count. To know Dynnea was to love Dynnea. She is already missed by so many.

Dynnea Edwards, 47, passed away Wednesday, January 16, 2019 at her home in Crystal Springs. The family will receive friends for visitation on Thursday, January 24, 2019 from 12:00 p.m. until the 2:00 p.m. Memorial Service at Chancellor Funeral... View Obituary & Service Information

The family of Ms. Dynnea Edwards created this Life Tributes page to make it easy to share your memories.