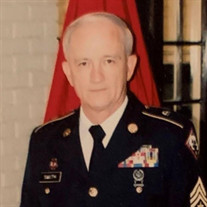 Donald L. “Donnie” Smith Sr., went to be with his Heavenly Father on November 20, 2021, with his family by his side. Visitation will be Friday, November 26, 2021 from 5:00 p.m.—8:00 p.m. at Chancellor Funeral Home in Byram, MS and again on Saturday, November 27, 2021 at Alta Woods Baptist Church in Jackson, MS from 9:00 a.m. until the hour of the service at 10:00 a.m. The funeral service at Alta Woods Baptist Church will be available on the Chancellor Funeral Home Facebook page via livestream at the time of the service. Interment will follow at Lakewood Memorial Park in Jackson, MS. Pallbearers will be COL (Ret) Stan Harris, COL (Ret) Craig Jones, COL (Ret) Rodney Harris, MAJ (Ret) Patrick Wooten, CPT (Ret) Hayes Dent, and MSG (Ret) Tony Goodwin. Honorary Pallbearers are former baseball players, Church basketball players, deacons of Alta Woods Baptist Church, and National Guard unit members. Donnie was born November 7, 1948 in Jackson, MS and lived there until 1994 when he moved his family to Raymond. He attended Provine High School where he met the love of his life, Delma Elizabeth Lacy. He graduated from Wingfield High School as a member of the first graduating class in 1967. He attended Hinds Community College and Mississippi College. During that time, he married Delma, “His Southern Belle”, on August 9, 1969. Donnie was a member of Alta Woods Baptist Church for fifty-three years, where he served as a deacon and a chairman of many committees. He taught Sunday school, fifth grade training union, and five year old discipleship training. He sang in the Chancel Choir and the Joy Choir. He loved to sing solos and share his love of music with others. He was instrumental in starting the Veterans Day service, that has continued for seventeen years. Donnie served in the Mississippi Army National Guard for thirty-seven years, achieving the rank of Sergeant Major. He also participated in many state active duty assignments. He was the first Mississippi Army National Guardsman to finish the two-year Sergeants Major Academy in one year. He helped lead several Special Olympic events at Camp Shelby. He is known for coaching baseball over the course of twenty-five years in the south Jackson area. He loved the young men like they were his own. He did not think of himself not only as a coach, but a mentor. He retired from the Mississippi Employment Security Commission with thirty years of service as Chief of Technical Services. He stated that his early years were his most enjoyable years because he was given the opportunity to interview individuals and send them to job opportunities that they were qualified to fill in both public and private sectors. Donnie always said he took pride in “sitting with a person who needed a job and being able to refer them to employers.” After his retirement at MESC, he and Delma bought “The Trophy Shoppe” located in south Jackson. They managed it for over twenty-one years and made lifelong friends. He is preceded in death by: His parents, Paul P. Smith and Mildred Lester Smith of Jackson, MS as well as his brother, Jerry Paul Smith of Laurel, MS. He is also preceded by his grandparents, Plummer and Inna Belle Smith of Braxton, MS. He is survived by: his wife of fifty-two years, Delma Lacy Smith, a son, Donald “Lee” Smith Jr. and his wife, Jayme Thomas Smith of Raymond, MS. A daughter, Shae Smith Crumpton and her husband, Brent Johnson Crumpton of Tupelo, MS. Brother, Bobby Joe Smith and his wife, Debbie Oliphant Smith of Knoxville, TN. Sister-in-law, Martha Ann Flowerday and her husband, Ted Flowerday of Madison, MS. He is also survived by several nieces and nephews. His four grandchildren are Walker Lee Smith and Chase Thomas Smith of Raymond, MS, and Mary-Grace Elizabeth Crumpton and Tucker Craig Crumpton of Tupelo, MS. His grandchildren were the light of his eyes.

The family of Mr. Donald Lee Smith Sr. created this Life Tributes page to make it easy to share your memories.

Donald L. “Donnie” Smith Sr., went to be with his Heavenly Father...