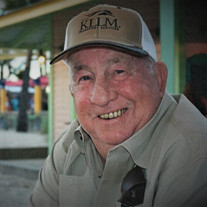 Cooper Phocian Windham was born January 17, 1940 at his family home in Sylvarena, Mississippi. He was always proud to share that he was the baby of eleven children. He graduated from Raleigh High School in 1957. He went on to serve in the National Guard before he began his career as an electrician while continuing to serve in the National Guard. He was a member of the International Brotherhood of Electric Workers Local 480 for 60 years where he served as president for many years. More recently he was a member of First Baptist Florence. Cooper lived life to the fullest. He loved being with his family and friends more than anything, and everyone that knew him was ready for a good story that he loved to tell. He was a loving son, brother, uncle, husband and father but his greatest joy was being Granddaddy to his 10 grandchildren and 2 great grandchildren whom he adored and they adored him in return. He loved watching and helping coach his own children through sports and worked with youth sports league around Florence when his children were younger. He loved spending time with his grandchildren and was very active in whatever his grandchildren were doing from the sports to the rodeo arena. He was an avid Eagle fan for his grandchildren and others he took in as his own. When he wasn’t watching a sport or a rodeo, he could often be found manicuring his yard which hosted many family soccer and baseball games. He always made time for and enjoyed visiting everyone that stopped by his home. He was eager to feed the next grandchild or friend. His wisdom he passed on both real and comical will be cherished forever. He will be greatly missed. Cooper is preceded in death by his parents, Zeak W. Windham and Mattie Keyes, along with 10 siblings. He is survived by his wife, Rachel Mangum Windham of 60 years of marriage; their three children, Michael “Mike” Phocian Windham (Jamie), Rachelle Shorter (Bob), and Renee Whatley (Mike); 10 grandchildren; Orin Shorter (Maggie), Lindsey Myers (Robert), Bryor-Codie Shorter, Micah Windham, Windham Whatley, Zeak Shorter, Will Whatley, Swayze Shorter, Emily-Rae Whatley, Maddie Jae Windham; 2 great grandchildren; Milli-Kate Shorter and Luke Windham Myers; and two grandsons the Cooper called adopted, Cody Sullivan of Brandon and Guiherme Avila Terra “G” from Brazil. The family will receive friends for visitation on Thursday, March 31st from 5:00 – 8:00 p.m. at Chancellor Funeral Home in Florence and again on Friday, April 1st from 10:00 a.m. until the 11:00 a.m. funeral service at First Baptist Church in Florence. Burial will follow in the Garden of Memories next to the funeral home. Online guestbook may be signed at www.chancellorfuneralhome.com.

Cooper Phocian Windham was born January 17, 1940 at his family home in Sylvarena, Mississippi. He was always proud to share that he was the baby of eleven children. He graduated from Raleigh High School in 1957. He went on to serve in the National... View Obituary & Service Information

The family of Mr. Cooper Phocian Windham created this Life Tributes page to make it easy to share your memories.