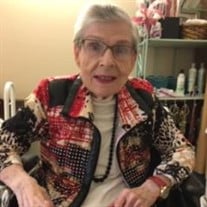 Claudine Martin Griffing, 85, passed away Wednesday, May 15, at Lakeland Nursing and Rehabilitation in Jackson from complications of Parkinson’s Disease. Visitation will be from 1 to 2 p.m., Saturday, May 18, at Chancellor Funeral Home in Florence, followed by an onsite memorial service. The youngest child of Claude and Lois Martin, Claudine grew up in Silver Creek, Miss. and graduated from Central High School in Jackson. When she was 20, she married Aubrey Emille Griffing, whom she met when she doubled with a friend on a blind date. (Emille was not her date.) They were married until his death in 2009, and her daughter, Susan Griffing Christensen, liked to say they had the perfect relationship. He liked to tell people what to do, and she didn’t mind someone else making the decisions. Still, she got her way more often than not. When her three children started school, she became a daycare worker for Parkway Baptist Church in Jackson, where she had no problem managing a room of rowdy 4-year-olds. She eventually became a teacher’s assistant for Jackson Public Schools, with stints at both Key Elementary and Baker Elementary. She retired early to enjoy escapades with Emille, which mostly involved driving somewhere to eat seafood. After her husband’s death, she moved to family property in Star. She lived in the same house as her older son, Emille Griffing Jr., and across the field from her youngest son, Tony Griffing. Both benefitted from her cooking, although she didn’t make them homemade biscuits every day like she did for Emille Sr. Since 2015, she has resided at Lakeland Nursing Home, and the family would like to thank the staff there for their compassionate care and her roommate Emily for her kindness. Claudine never believed in being a social butterfly, but she had friends among the staff who seemingly admired her iron will and spunky nature. God bless ‘em. Claudine was preceded in death by her husband Emille Sr., her brother Ivan Martin and her sister and brother-in-law Laura and Arthur Condia and their son Ricky Condia. In addition to Emille Jr., Tony, Susan and her husband, Mike Christensen, Claudine is survived by five grandchildren, Carlee Griffing, Emily Griffing, Zachary Griffing, Kieran Christensen and Marshall Christensen. In lieu of flowers, the family suggests you take your favorite mother figure out for seafood and some shopping. They will always treasure that they got to do that one last time with Claudine this past Mother’s Day. Other donations may be made to the Michael J. Fox Foundation, the Parkinson’s Foundation or the patient care fund of Methodist Rehabilitation Center. Online guestbook may be signed at www.chancellorfuneralhome.com.

Claudine Martin Griffing, 85, passed away Wednesday, May 15, at Lakeland Nursing and Rehabilitation in Jackson from complications of Parkinson&#8217;s Disease. Visitation will be from 1 to 2 p.m., Saturday, May 18, at Chancellor Funeral Home... View Obituary & Service Information

The family of Mrs. Claudine Martin Griffing created this Life Tributes page to make it easy to share your memories.