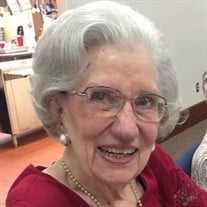 Mrs. Clara Louise Townsend, 92, passed into the arms of Jesus, on Thursday, November 29, 2018 at Villa South Assisted Living in Florence, MS. The family will receive friends for visitation on Saturday, December 1st from 11:00 a.m. until the 2:00 p.m. Funeral Service at Chancellor Funeral Home in Florence. Burial will follow the service at Florence City Cemetery. Mrs. Townsend was born September 28, 1926 to the late Truman B. and Annie Thornton Gideon in Becker, MS. She was a graduate of West Point High School in West Point, MS, where she was the Salutatorian of her 1944 graduating class. She then attended Bowling Green Business School in Bowling Green, KY. She held several secretarial positions at Belzoni Baptist Church in Belzoni, MS; FBC Baton Rouge, LA; FBC Tulsa, OK; and she was also the assistant to the Executive Secretary of the MS Baptist Convention in Jackson, MS. In 1954, she married Claude Townsend of Johns, MS and they made their home in Jackson, MS. Together they owned and operated Townsend Piano Company while they started their family. In 1965, they moved their family to Florence where she continued to keep the books for the family business. She also stayed active in church work, teaching Sunday School, playing the piano, and singing in the choir. Over the years, they were involved in many mission trips including India, Korea, and the Philippians and numerous states in the U.S. As her husband taught Counseling at Immanuel Baptist Seminary in Sharpsville, GA, she received her B.A. in Bible. She was a member of Cleary Baptist Church in Florence. Mrs. Townsend is preceded in death by her parents and her husband of 48 years at the time of his death in 2002. She is survived by her 5 children, Debbie (Gavin, Sr.) Lott of Florence, Tesa (Herman) Duckworth of Magee, Claudia (Bruce) Steele of Florence, Keith (Connie) Townsend of Mize, and Ken (Chris) Townsend of Florence; 14 grandchildren; 31 great grandchildren; and 1 great great granddaughter.

Mrs. Clara Louise Townsend, 92, passed into the arms of Jesus, on Thursday, November 29, 2018 at Villa South Assisted Living in Florence, MS. The family will receive friends for visitation on Saturday, December 1st from 11:00 a.m. until the... View Obituary & Service Information

The family of Mrs. Clara "Louise" Townsend created this Life Tributes page to make it easy to share your memories.

Mrs. Clara Louise Townsend, 92, passed into the arms of Jesus,...