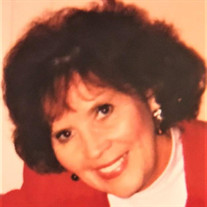 Carol June McAlilly Ball, born in Louisville, Mississippi in 1932, passed away October 02, 2020. She had been struggling with dementia which may have contributed to a stroke occurring during her sleep. She was the daughter of Roy and Archie (Breckinridge) McAlilly. She grew up on a rural farm in Winston County where she and her brother, Roy Dean, worked very hard growing cotton, corn, potatoes, hogs and milking cows. After graduating Louisville High School in 1952, she married Robert Ball of Louisville, a counter intelligence officer for the US Army, assigned to a post in Eschwege, Germany. June had her first child, Michael in an Army Hospital in Frankfurt. After 18 months, the family returned to the states making residency in Jackson, MS. June had her second child, Penny Diane in 1960. Penny became a Type 1 diabetic at 3, and at age 30 required a pancreas transplant. June was one of the first anywhere, of a parent to donate a partial living pancreas to their own child at the University of Minnesota in 1988. After a year, Penny required a kidney and, like the pancreas, June didn’t hesitate to provide. June served as a Vice President of the Federal Land Bank and later decided to become a realtor in Rankin County. She made it clear that being a real estate agent gave her the best job satisfaction, offering her a great opportunity to meet and help people. June was diagnosed with breast cancer in 2011, but was able to find a very happy and peaceful life at her reservoir home with the best of neighbors and friends—on the water and watching daily sunsets—until she moved into the Willow Creek Nursing Facility at Byram in 2017. June was the epitome of both a mother and grandmother; an avid gardener, amazing cook; ran the family farm; and loved raising and showing horses and cows. She traveled throughout the US and Europe. She loved to fish, dance, swim and sing hymns. She was a long-time member of The First Baptist Church of Jackson. Her life’s journey touched many lives and she will be remembered by many as a truly unselfish Christian woman. June is survived by her son, Michael Ball and grandchildren, Trevor Ball and Shelby Ball of Washington State and Megann Black of Brandon. She was buried at Floral Hills in Pearl, MS, near her daughter. June would have appreciated donations to any cancer, diabetes, or Alzheimer’s research.

Carol June McAlilly Ball, born in Louisville, Mississippi in 1932, passed away October 02, 2020. She had been struggling with dementia which may have contributed to a stroke occurring during her sleep. She was the daughter of Roy and Archie... View Obituary & Service Information

The family of Mrs. Carol June Ball created this Life Tributes page to make it easy to share your memories.