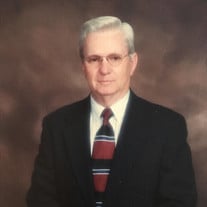 The funeral service for Dr. Carl Savell will be held on Saturday, September 8, 2018, at 3:00pm at Highland Colony Baptist Church in Ridgeland, Mississippi. Visitation will be at Highland Colony Baptist Church, prior to the service, from 1:00pm – 3:00pm. A family graveside service will be held in Rolling Fork, Mississippi. Dr. Savell went to be with his Heavenly Father at age 81 on September 5, 2018. He was born in Catchings, MS outside Delta City on July 30, 1937. He was the youngest of eight children born to Herbert Arlington Savell, Sr. and Nettie Fleming Savell. Dr. Savell is preceded in death by his brothers Carmon Arlington Savell, Olen Wesley Savell, Vernon David Savell, William Hillen Savell and his sister, Mary Louella (Sally) Savell Younger. He is survived by two brothers, Herbert Arlington Savell, Jr. and Harold Augustus Savell. He is also survived by his wife of 61 years, Barbara (Bobbie) Savell, sons Tim Savell (Cindy) and Todd Savell (Susan) and four grandchildren, Kristen Savell Hebert (Preston), Jordan Savell, Daniel Savell and Anna Claire Savell. Dr. Savell graduated high school in 1955 from Anguilla High School. Dr. Savell loved to tell the story of how he met the love of his life, Bobbie Sanderford Savell. Shortly after Bobbie’s school at Delta City consolidated with Anguilla High School, Carl rounded a corner in school one day and laid eyes on the most beautiful blonde he had ever seen. That blonde, Barbara (Bobbie) Sanderford, became his wife on the day of her 18th birthday in June of 1957. Following high school, Dr. Savell completed his bachelor degree at Mississippi College in 1960. He and Bobbie then attended New Orleans Baptist Theological Seminary where he received his Master of Divinity. Later he received a Doctorate of Ministry degree. Dr. Savell’s life was prioritized first by his faith and then his family. He and Bobbie lived a life completely full of love for God, their family and others. With Bobbie right by his side, Dr. Savell was involved in the leadership and pastoring of 11 churches in Mississippi from 1957 – 2018, most notably, Pelahatchie Baptist Church, Woodville Heights Baptist Church, Highland Colony Baptist Church, Westview Baptist Church and, at the end of his career, Southern Hills Baptist Church. He also served as Interfaith Witness Director of the Home Mission Board (now North American Mission Board) of the Southern Baptist Convention In addition to serving others as a pastor, perhaps Dr. Savell’s greatest act of service and “denying of self” began in August of 2010 after his beloved Bobbie suffered a stroke. At that time, he became her loving and devoted caretaker and remained so until his last breath. Dr. Savell has authored a book entitled My Life as Shaped by God, where he acknowledges that the two books that have had the greatest impact on his life are the Bible and the Baptist Hymnal. In this book he also pays tribute to his Mom and Pop who made a huge investment in his life of faith through nightly Bible reading, prayer time and hymn singing. Dr. Savell’s family finds comfort in knowing that he can now say, “I have fought the good fight, I have finished the race, I have kept the faith” and receive his “crown of righteousness.” (2 Timothy 4: 7-8) In lieu of flowers, memorial gifts may be made to the Miracle Fund of Highland Colony Baptist Church 1200 Highland Colony Parkway, Ridgeland, Mississippi 39157.

The family of Dr. Carl Savell created this Life Tributes page to make it easy to share your memories.

The funeral service for Dr. Carl Savell will be held on Saturday,...