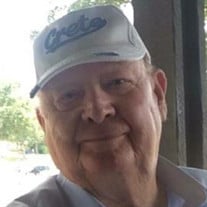 C.W. “Buddy” Holland passed away on Sunday, August 2, at the age of 95. He died peacefully of natural causes in hospice care at Baptist Hospital in Oxford. He was known to his extended family as “Buddy”, his daughters as “Daddy”, and his grandchildren and great-grandchildren as “Pop”. C.W. grew up in rural northeast Mississippi, joined the U.S. Navy at 17 and was stationed in Pensacola during World War II. After the war, he began working at General Electric in Memphis, Tennessee, where he met Ella Mattie “Bobbie” Crosby, who would become his wife of 52 years. Together they raised two daughters, Anita Joyce and Paula Ann. In 1990 they moved to Jackson, Mississippi, to be closer to their grandchildren. Following Bobbie’s death in 2000, C.W. married Maryann Mathis in 2002. Upon her passing in 2009, he moved to Batesville to be near his daughter, Anita Joyce, where he lived the remainder of his life. He is preceded in death by his beloved wives, Ella Mattie Crosby Holland (m. 1948-2000) and Maryann Mathis Holland (m. 2002-2009), his parents and sisters. He leaves behind his daughters, Anita Smith (Johnny) and Paula Mayfield, grandchildren Brett Mayfield, Rita Hodges (Brandon), and Bart Mayfield (Tanya), and great grandchildren, Sebastian Hodges, Bella Hodges, Brady Mayfield, and Lilly Mayfield. The family wishes to thank the staff at Baptist Hospital of Oxford for their kindness and care over the past two weeks. In lieu of flowers, the family requests In Memoriam donations to St. Jude’s Children’s Hospital in Memphis. Visitation will be at 10:00 am on Thursday, August 6th, at Chancellor Funeral Home in Byram, Mississippi, with graveside service at 11:30 am at Rosemont Gardens Memorial Park. The family understands that due to current conditions, some may choose to honor and remember the life of C.W. Holland from their homes.

The family of Mr. C. W. "Buddy" Holland created this Life Tributes page to make it easy to share your memories.