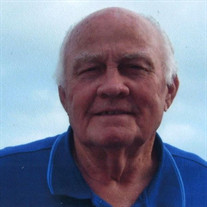 Buck Turner Kennedy, 81, passed away peacefully and surrounded by his family at his home in Florence on Monday, November 12, 2018. Visitation will be from 5:00 – 8:00 p.m. on Wednesday, November 14th at Briar Hill Baptist Church in Florence. The Funeral service will be held at 11:00 a.m. on Thursday, November 15th at Briar Hill Baptist Church with visitation one-hour prior. Burial will follow at Briar Hill Baptist Church Cemetery. Buck was born in Noxapater, MS to the late Reverend James “Ed” Kennedy and Grace Palmatree Kennedy of French Camp, MS. Along with his parents, he is also preceded in death by his only daughter, Cynthia “Cindi” Leigh Kennedy Myers. He is survived by his wife of 59 years, Alma Joanne Kennedy; his two sons, James “Dow” (Heather) Kennedy of Sumrall, MS and Preston Wade (Glenda) Kennedy of Oxford, MS; 2 sisters, Irine Robinson of Texas and Willideen Sanders of Greenville, MS; 10 grandchildren, Joshua and Joseph Myers, Katie, Trevor, and McKenzie Kennedy, Grant and D.J. Baxter, Randee Kennedy, Cyndi Pickett and Mickey Davis; 8 great grandchildren, Chase and Kayden Myers, Ashton Breeze Myers, Noah Pittman Myers, Aubrey Layne Baxter, Carley Bassie, Trevor Bassie and Preston Davis; son-in-law, Jerry Myers. A devoted husband, father and grandfather, devout Christian, Hall of Fame Football Coach, and coach and mentor to thousands of students and football players across Mississippi, Buck served his Christian Faith in every capacity providing a Christian life example to his family and all who knew him. He was devoted to his church, Briar Hill Baptist Church, and over the course of his life served in every church capacity as a deacon, Sunday School Director and pastor search committee just to name a few. Buck never abandoned his faith in public, even as society and school systems made it hard to “wear your faith”. He led his teams in prayer before and after every game and would offer his testimony aloud to others who needed Christian encouragement. As a Football Coach and Teacher, like many small-town coaches he moved around early in his career before finally settling down in Noxapater, MS in 1970. He was a gifted coach and teacher leading his teams to winning seasons, many conference championships, and bowl games. In 1972 he was selected as an assistant coach to the Mississippi All Star Game and in 1973 he served as the head coach. In 2006 he was inducted into the Mississippi Coaches Hall of Fame. When asked his most significant accomplishment in coaching, he didn’t respond with winning seasons or championships but instead “by providing the thousands of football players and students with a Christian role model and life example.” Buck never owned a “smart phone” never had a “face book” account but he kept up with his players and students the old-fashioned way, by telephone or visits. He kept a handwritten calendar to remind him of upcoming events. He was a die-hard Mississippi State Fan but really just enjoyed any type football game. In addition to football, he enjoyed working in his yard and on his property, spending time with family and friends, and playing golf.

Buck Turner Kennedy, 81, passed away peacefully and surrounded by his family at his home in Florence on Monday, November 12, 2018. Visitation will be from 5:00 &#8211; 8:00 p.m. on Wednesday, November 14th at Briar Hill Baptist Church in Florence.... View Obituary & Service Information

The family of Mr. Buck Turner Kennedy created this Life Tributes page to make it easy to share your memories.