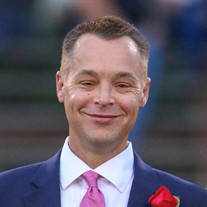 Blakely Heath Blackwell was born March 22, 1977. He was the middle son of Don and Deborah Blackwell. Blake passed away peacefully on February 1, 2020 after a long, brave fight from multiple health issues. His fighting words came from Job 13:15, “Though he slay me, yet I will trust Him.” Blake is survived by his beloved wife, Casey Rowe Blackwell, and their two courageous children, Lynley and Tanner Blackwell, who he loved more than himself and would give the world just to see them smile. Blake is also survived by his parents, Don and Deborah Blackwell; his brother Justin (Mary Catherine) Blackwell; his sister Hayley (Johnny) McKinion; his In-Laws Mark and Ann Rowe; brother-in-law Mark (Kandice) Rowe; and sister-in-law Haley (Zac) Hultz. He was a beloved Uncle to several nieces and nephews: Caitlyn and Caroline Blackwell, Allie and Hannah Loftin, Trace, Leo, and Piper Rowe; Annsley and Greyson Hultz. Blake was an avid golfer and baseball player. One of his greatest passions was coaching his children in baseball and softball. Watching his children apply his coaching techniques that they would work so hard on one on one at the batting cages or extra hours on the field together would bring such joy and pride to his heart. There was nothing like being their Daddy. He was not only passionate about coaching his own children, but he poured into every child on his team. He was the kind of coach that took chances and saw the potential in every child no matter their age or level of play. He brought out the best in each one because he believed in their ability to play the game. More than an athlete, or a coach, Blake was Casey’s husband. Blake met Casey in college 20 years ago. He knew from the first time he saw her that they would be married. He was right. They were married 18 years ago on a summer day in July. During these years, Blake fought many health issues, and Casey never left his side. Blake loved his wife the way Christ loved the church, and Casey gave her life up for her husband every single day as his partner and caregiver. Blake had many accomplishments in his lifetime, including many athletic achievements. He was also known for his hysterical sense of humor, epic party dance moves, and his ability to belly laugh at his own jokes; however, his greatest honor happened on April 3, 2006, when he became Lynley and Tanner’s Daddy. He always referred to Lynley as his beautiful angel, sweet baby girl, Daddy’s princess. His Tanner was his “buddy,” his best friend, his pride and joy. He loved his children unconditionally. He was their biggest fan, encourager, and mentor. He is proud of the legacy that will live on in them. He is forever a part of their hearts. James 1:2-4, “Consider it pure joy, my brothers and sisters, whenever you face trials of many kinds, because you know that the testing of your faith produces perseverance. Let perseverance finish its work so that you may be mature and complete, not lacking anything.”

Blakely Heath Blackwell was born March 22, 1977. He was the middle son of Don and Deborah Blackwell. Blake passed away peacefully on February 1, 2020 after a long, brave fight from multiple health issues. His fighting words came from Job 13:15,... View Obituary & Service Information

The family of Mr. Blakely Heath Blackwell created this Life Tributes page to make it easy to share your memories.