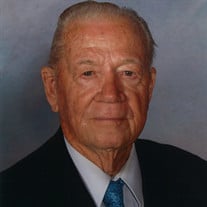 Billy R. Polk, 88, went to be with his Lord and Savior, Jesus Christ, Mon, Aug 26, 2019 at his home in Terry. Visitation will be 5-7pm Thurs, Aug 29, 2019 and again on Fri Aug 30, 2019 10am until the 11am funeral service, all at Wynndale Baptist Church in Terry. Interment will follow at Lakewood Memorial Park. Survivors include children: Douglas Polk of Pearl, Kay Guyton (Larry) of Conroe, TX, Steven S. Polk (Lynn) of Terry, grandchildren Jason Polk (Laura), Matthew Guyton (Brew), and Will Guyton and 5 great grandchildren. He is survived by his sister-in-laws, Merle “Pap” Mize and Susanna Orr; and brother-in-law, Bill Orr. He leaves behind many nephews, nieces, and cousins. Billy was born on Oct. 27, 1930 to Guysell and Lillian Polk. He was predeceased by his wife 0f 57 years, Anita Mize Polk. Billy graduated from Central High School class of 1950 and Mississippi College in 1959. He served in the U.S. Navy as a Seaman 3rd Class from 1951- 1955 and he was employed by the Jackson Fire Department from 1955 until his retirement as District Chief in 1992, after 36 years of service. He has been a dedicated member of Wynndale Baptist Church for 25 years. Memorials may be made to: Wynndale Winners Wynndale Baptist Church 11287 Springridge Road Terry, MS 39170 Online guest book available at www.chancellorfuneralhome.com.
To order memorial trees or send flowers to the family in memory of Mr. Billy R. Polk, please visit our flower store.