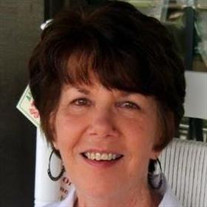 Ms. Billie Ruth (Pruitt) Goode, 74, of Raymond, MS went home to be with her Lord and Savior, Jesus Christ, on Saturday, August 4, 2018 at Simpson General Hospital in Mendenhall where she was under the care of Kindred Hospice. She was surrounded by her loved ones. Billie was born on Febuary 19, 1944 in Mize, MS to the late Virgil and Avil (Craft) Pruitt. She attended Mize High School in Mize, MS where she graduated in 1962. During her time as a student there, she was an active member of several clubs including; The Mizinnia Staff, The Bulldog Barks Staff, chorus, 4-H, and FHA. She was also a member of the Mize High School Basketball team. She married the love of her life, Robert Malcolm Goode, on August 20, 1965. Together they have one daughter, Kimberly Dawn Patton. Billie and Malcolm were blessed with 47 years of marriage when the Lord called Malcolm home on April 14, 2013. Billie was a longtime resident of Raymond where she retired as a teller from Merchants and Planters Bank. While working there, she formed many bonds and gained many friendships along the way. She was the personification of grace and Christian kindness. Her passion was her faith, her family and her friends. She loved like there was no tomorrow and always had a smile to share. Billie was always a strong and courageous optimist when it came to the many battles with her health along the years. Billie enjoyed the outdoors and spent many hours with her husband on their back porch drinking coffee in the mornings and sweet tea in the afternoons. She loved working in her flower beds and cooking for her family and friends. She was also known for her famous coconut cake. She loved gospel music and listening to anyone play the piano. She was a member of the First Baptist Church of Raymond where she adored her church family and Sunday school class. On January 24, 2018, Billie became a first time Grandmother to Piper Karoline Patton. The bond they shared in their short time together on earth was truly immense. She is preceded in death by her parents, Virgil and Avil Pruitt of Mize, MS and her husband, Robert Malcolm Goode of Brownsville, MS. She is survived by her daughter, Kimberly Dawn Patton, son-in-law, Harlon Patton and granddaughter, Piper Patton all of Raymond, MS. She is also survived by her siblings; E. L. “Pete” Pruitt (Gail), Bobby Joe Pruitt (Elaine) of Hazelhurst, Dorothy Goode (Jerry) of Bolton, and John Paul Pruitt (Mary) of Richland; as well as numerous nieces and nephews. Visitation will be held at Chancellor Funeral Home in Byram on Monday, August 6, from 6:00pm to 8:00pm. Funeral services will be held at the First Baptist Church of Raymond on Tuesday, August 7 at 11:00am with a visitation from 10:00am until the 11:00am service. Final resting place will be at the Raymond Cemetery following the service. Any donations may be made to the First Baptist Church of Raymond, MS The family would like to thank Dr. Indira Veerisetty and Ken Kaiser, NP with Madison Ridgeland Medical Clinic along with their staff, as well as, Dr. Maria Rappai and Anna Walley, FNP of Jackson Pulmonary Associates along with their staff, for not only all the amazing medical care we have received over the years, but also the love that has been shown and the life long friendships that were made.

Ms. Billie Ruth (Pruitt) Goode, 74, of Raymond, MS went home to be with her Lord and Savior, Jesus Christ, on Saturday, August 4, 2018 at Simpson General Hospital in Mendenhall where she was under the care of Kindred Hospice. She was surrounded... View Obituary & Service Information

The family of Mrs. Billie Ruth Goode created this Life Tributes page to make it easy to share your memories.