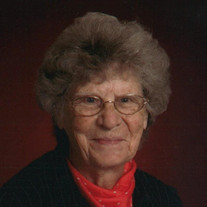 Billie Jean Brewer “Miss Billie” Anding, formerly of Florence, MS, died Wednesday, December 26, 2018 at the age of 94. Visitation will be Wednesday, January 2nd, from 5-7p.m. at Chancellor Funeral Home in Florence. The funeral service will be at Marvin United Methodist Church in Florence at 11:00 a.m. on Thursday, January 3rd. Mrs. Anding was a faithful follower of Christ and this was apparent to all who knew her. She met her future husband, “Bro. Bob Anding,” when both were students at Southwest Junior College in Pike County, MS, and they married after his return from combat duty in WWII. She was a graduate of Millsaps College and completed advanced degrees at The University of Mississippi and Mississippi College. Miss Billie was a second-grade teacher with the Jackson Public Schools and formed lasting relationships with many students and colleagues. Both during her working life and in retirement, she was loved for her devotion to others and her commitment to helping those in need, whatever that need might have been. She enjoyed growing flowers (especially roses) and had a love of music, both of which she passed down to her children and grandchildren. Mrs. Anding is survived by her sons, Jamie Anding and his wife, Doreen, from Charlotte, NC; Skipper Anding from Ridgeland, MS and Charlie Anding and his wife, Brenda, from Madison, AL; grandchildren, Jason Anding from Grenada, MS, Blake Anding from New York City, NY and Emily Anding from Albuquerque, NM; and a niece, Mamie Anding from Irving, TX. In lieu of flowers, memorials may be made to Marvin United Methodist Church or the Robert E. Anding Endowed Scholarship Fund at Millsaps College.

The family of Mrs. Billie Jean Anding created this Life Tributes page to make it easy to share your memories.