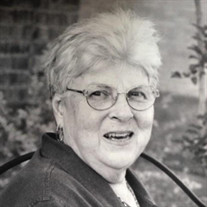 Luke 1: 46-47. “My soul magnifies the Lord, and my spirit rejoices in God my Savior.” Elizabeth “Bettie” Golden Salmon Rooks, 90, died peacefully surrounded by her children and grandchildren on Wednesday, August 5, 2020. A mass of Christian burial will be held for immediate and extended family at St. Francis of Assisi Catholic Church in Madison on Monday, August 10 at 1 p.m. followed by a burial at Lakewood Memorial Park. A rosary service will precede the funeral at 12:30 p.m. in the church. Due to COVID-19, guidelines will be in place according to the State of Mississippi. The service will be live-streamed via St. Francis of Assisi’s Facebook (https://www.facebook.com/StFrancisAssisiMadison/videos/294136721662155/) and Youtube page (https://www.youtube.com/watch?v=QyPrCpXDK8A). Bettie was born on May 17, 1930 in Vicksburg, MS, the youngest child of Mary Elizabeth (Schaffer) Salmon and James M. Salmon. One of 11 children, she spent her youth in Vicksburg and attended Francis Xavier Catholic School where she enjoyed her studies as well as music and singing, dancing, theater, and basketball. After graduation, she joined her sister Margaret “Sister” Bucci at the Illinois Central Railroad Vicksburg office as a secretary and stenographer. Her railroad career took her to Natchez and Baton Rouge, before returning to Vicksburg to care for her mother and younger siblings. Bettie met Nutbush Tennessee native John Dunaway “Jack” Rooks who at the time was a traveling salesman for Shapleigh Hardware Company. They fell in love, married on November 4, 1957, and moved to south Jackson where they went into partnership with Joe Revell, founder of the Revell Hardware Company. In 1959, they had their first of seven children. Bettie and Jack purchased Revell Hardware in 1974. Together they expanded it into a successful retail hardware business that is managed by three of their sons today. Through the decades she was a devoted wife, business partner and a loving mom, driving the family station wagon, and later a van to her children’s school, sports and church activities at St. Therese Elementary School, Whitten Junior High and Jim Hill and St. Joseph High Schools. Other neighborhood children, schoolmates and relatives were frequent visitors at Bettie’s oversized “Lazy Susan” dining table where she always had plenty to serve those who joined for meals and snacks, or just to visit. Bettie was an active parishioner at St. Therese Catholic Church since 1957, and was a beloved wife, mother, mother-in-law, grandmother, daughter, sister, aunt, cousin, and sweet friend to many. For over 50 years she sang with joy in the St. Therese choir and served with friends in the Madonna Circle. A lifelong helper, she donated countless hours to her church, school, and community charities. Jack and Bettie were married for 52 years. After his death, she moved to St. Catherine’s Village in Madison, where she was well-known for her acumen in crosswords, word search, trivia, songs, and hymns. She was preceded in death by her husband, parents, and siblings Buddy Salmon, Annie Mae Mahoney, Pat Middleton, Barbara Cesare, Rita Evans, Mike, Albert, and Donnie Riddle. She is survived by her sister Margaret Bucci and brother Billy Riddle of Vicksburg, sons Dunaway Rooks (Teresa) of Pearl, Russell Rooks (Lele) of Jackson, Joe Rooks (Lisa) of Raymond, and Tim (Kim) of Brandon, and daughters Elizabeth Rooks-Barber of Flora, Helen Rooks-Butts (Larry) of Jackson and Frances Rooks-Patterson of Madison. Survivors also include 18 grandchildren: John Rooks (Lillian) of Brandon, Robert Rooks of Jackson, Paxton Rooks (Destiny) of Clinton, Graham Rooks (Mary) of Jackson, Charlie Rooks of Raymond, Jack Butts (Megan) of Gluckstadt, Will Butts of Jackson, Rooks Patterson (Rachel) of Jackson, Revell Patterson (Haley) of Virginia Beach, VA, Russell and Olivia Patterson of Madison, Sam, Max and Luke Rooks of Brandon, and Haley, Zoe, Phoebe and James Rooks of Jackson. Bettie is also survived by 8 great-grandchildren: Andersen Butts, Oliver Jones, Emersen Patterson and Gabriel, Emory, Avery Jane, Walker and Rosemary Rooks, plus many dear sisters-in-law, nieces and nephews and a host of new and lifelong friends. In lieu of flowers, please make a gift to a charity you love or Catholic Charities of Jackson, St. Therese Catholic Church, St. Francis of Assisi Catholic Church, Little Lighthouse-Central Mississippi, Birthright of Jackson, or the Center for Pregnancy Choices.

The family of Mrs. Bettie Rooks created this Life Tributes page to make it easy to share your memories.