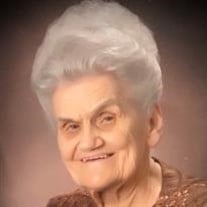 Bettie Jean (Wilhite) Frazier, was born November 28, 1926 and passed from this life on April 20, 2018. Services will be held at First Pentecostal Church in Jackson on Tuesday, April 24 at 2:00 PM. Visitations will be held at the Church on Monday, April 23 from 5:00 - 8:00 PM and again Tuesday, from 12:00 - 2:00 PM. Bettie lived a remarkable life in spite of her handicap. She was declared legally blind at age 13. She was encouraged by the principal of her school to finish her high school education at Quitman High School; Bettie readily agreed and became the first blind student to graduate. Following high school, she moved to Jackson and began work at Mississippi Industries for the Blind. There she met Monroe Frazier, the love of her life. Together they built a beautiful life and were blessed with the birth of two children; Pam (Frazier) Frizzell and Reverend Greg Frazier. In 1962, Bettie was introduced to the First Pentecostal Church of Jackson. Her life was never to be the same again. She quickly fell in love with the church, it’s members, and her pastor, Rev. Thomas L. Craft. Through the years, Bettie would become an integral part of this assembly. She used her beautiful voice and love of singing as a member of the choir. Her home became a place where people enjoyed delicious meals and special times of prayer. She became well known for her ability to cook and to pray. Mrs. Frazier was preceded in death by her parents, Pendelton and Hadi Wilhite and her only brother, Robert Wilhite. She is also preceded in death by her husband of 34 years, Monroe Frazier. She is survived by her son, Reverend Greg Frazier and wife Kathy of Terry; daughter, Pam Frizzell and husband Gary of Houston, Texas; grandchildren, Aaron Frazier and wife Alexa of Terry, Mississippi and Anna Frazier as well as numerous nieces and nephews and a host of friends. She will be dearly missed by both her physical family and church family.
To order memorial trees or send flowers to the family in memory of Mrs. Bettie Jean Frazier, please visit our flower store.