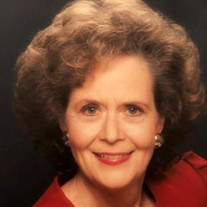 A family graveside service for Barbara Sanderford Savell will be held on Wednesday, August 12, 2020, in Rolling Fork, MS. Mrs. Barbara (Bobbie) Sanderford Savell went to be with her Heavenly Father at age 81 on August 9, 2020. Bobbie was born in Anguilla, MS on June 8, 1939. She was the youngest of two children born to Daniel Kent Sanderford, Sr. and Mattie K. Thornhill Sanderford. She was preceded in death by her brother Daniel Kent Sanderford, Jr. and her husband, Dr. Carl Savell. She is survived by two sons Tim Savell (Cindy) and Todd Savell (Susan), four grandchildren, Kristen Savell Hebert (Preston), Jordan Savell, Daniel Savell, Anna Claire Savell and great-grand daughter, Everly James Hebert. Bobbie graduated in 1957 from Anguilla High School. Her husband, Dr. Carl Savell, loved to tell the story of how they met. Shortly after Carl’s school at Delta City consolidated with Anguilla High School, he rounded a corner in school one day and laid eyes on the most beautiful blonde (Bobbie) that he had ever seen. Bobbie and Carl later married on her 18th birthday in June of 1957, and they enjoyed 61 years of marriage until his passing in 2018. Bobbie’s life was characterized first by faith and then family. Bobbie loved the Lord, she loved Carl, and she loved her sons and their families. One of her favorite roles was that of Nana, as she delighted in spending time with and doting on her grandchildren. Bobbie was an ever-present support to her husband as he pastored various churches in Mississippi. She also enjoyed her role in ministry which involved singing in choir and sending many cards and notes to church members and friends in need of encouragement. In August 2011, Bobbie suffered a stroke which left her unable to communicate verbally. However, she was still able to express her love for family, friends and caregivers through the light in her pretty blue eyes, her welcoming smile and the touch of her hand. Her family will miss her dearly, but they are comforted to know that she is now rejoicing face-to-face in her Savior with her husband, Carl, and other family members gone before her. The family would like to thank the many wonderful caregivers who shared their love and attention through the years. They especially would like to thank the caregivers at Highland Home, where she most recently lived. In lieu of flowers, memorial gifts may be made to the Mississippi Baptist Convention Retired Minister’s Fund, Attn: Gayla, P.O. Box 530, Jackson, MS 39205.

A family graveside service for Barbara Sanderford Savell will be held on Wednesday, August 12, 2020, in Rolling Fork, MS. Mrs. Barbara (Bobbie) Sanderford Savell went to be with her Heavenly Father at age 81 on August 9, 2020. Bobbie was... View Obituary & Service Information

The family of Mrs. Barbara Ann Savell created this Life Tributes page to make it easy to share your memories.

A family graveside service for Barbara Sanderford Savell will...