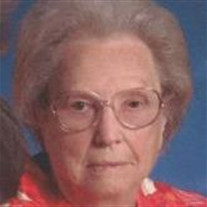 Annie Lou Gore Shaw passed away on Palm Sunday, April 14, 2019 at the age of 99 at Hospice Ministries in Ridgeland, MS. She was born on December 11, 1919 in Cadaretta (Webster County), MS to the late Daws B and Annie Price Gore, and grew up on her family’s farm on old Highway 82 on the outskirts of Eupora. She graduated from Eupora High School in 1937 and attended Wood Junior College in Mathiston and Delta State Teacher’s College in Cleveland. She taught five grades in a one room school house for one year and quickly decided that it was not the right fit for her in spite of her life-long love of learning. Her father encouraged her to take the civil servants exam which she did, and soon after she began her career with the US Postal Service. While her siblings married and moved away from home, Annie Lou remained at home on the farm for several years, working at the Post Office and helping support her parents. In 1955, she married Fred Shaw, Jr. of Horn Lake, MS. They first moved to Picayune, then Union, MO, and finally settled in Jackson where she lived for fifty years. She continued to work for the USPS in Jackson until the late 1960s when she took early retirement. After that, she held a few part time jobs with H&R Block and her church’s day care. She was a long time (50 year) member of Epworth United Methodist Church in Jackson where she served in many capacities. For many years she was the chair of Epworth’s Mission’s Committee and supported various local, national, and international ministries through her work in this capacity. Some of the causes she supported were the Choctaw Indian Mission, Bethlehem Center, Good Shepherd Center, Methodist Rehab, and the Methodist Children’s Home. After the closing of Epworth UMC in 2009, she became a member of First United Methodist Church of Clinton. She was also a member of Beta Sigma Phi sorority and Better Life Homemaker’s Club. She was an avid reader and enjoyed travelling. Some of her vacations took her to England (where she visited Epworth, the birthplace of John Wesley, and Coventry, where her father-in-law was born), Alaska, Hawaii, and Montreal and Toronto, Canada. She enjoyed sewing and needlework, and in her later years took painting lessons. Even in her advanced years she continued to look after the “old folks” among her friends and family who needed help, even though she was older than most of them. Until the very end of her life, she handled all of her financial and medical affairs, even doing her own taxes at age 98. After the death of her husband in 2000, she continued to live in their home at Swan Lake in south Jackson, and in 2009, just prior to turning 90, she made the decision to sell their house and move to Riggs Manor Methodist Retirement Home in Raymond. She was preceded in death by her parents, all of her siblings (two brothers, Thomas P Gore and John W Gore, Sr. and three sisters, Willie Nell Cook, Nina Moore, and Sarah Frances Williams), her husband, Fred Shaw, Jr., and daughter Suzanne Shaw. She is survived by her daughter, Sarah Shaw of Jackson, and her stepson, Colonel (ret) Fred Shaw, III (wife Lisa) of Canton. She is also survived by numerous nieces and nephews of many generations. Special thanks to Dr. George Smith-Vaniz for his continued care as her doctor for 40-something years, to the staff, friends, and neighbors at Riggs Manor, and to the staff at Hospice Ministries for their care in her final days. Visitation will be from 5-7 p.m. on Tuesday, April 16 at Chancellor Funeral Home in Byram. Funeral services will be at 10 a.m. Wednesday, April 17, at First United Methodist Church of Clinton with visitation from 9-10 a.m. in the church parlor. Burial will follow at Lakewood Cemetery in Jackson. Memorials may be made to FUMC Clinton or to the Mississippi United Methodist Foundation, Suzanne Shaw Scholarship Fund.

Annie Lou Gore Shaw passed away on Palm Sunday, April 14, 2019 at the age of 99 at Hospice Ministries in Ridgeland, MS. She was born on December 11, 1919 in Cadaretta (Webster County), MS to the late Daws B and Annie Price Gore, and grew up... View Obituary & Service Information

The family of Mrs. Annie Shaw created this Life Tributes page to make it easy to share your memories.