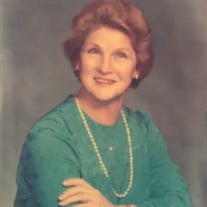 Mrs. Alwilda Speake Savell, 88, went to be with her Lord and Savior Tuesday, November 12, 2019 at her home in Terry. Visitation will be1pm-3pm on Sunday, November 17, 2019 at Chancellor Funeral Home in Byram, with the Memorial Service beginning at 3pm in the chapel. Mrs. Savell was a resident of Terry for 40 years and was a faithful member of First Baptist Church of Jackson. She served our country in the U.S. Air Force for three years and retired from the Mississippi Employment Security Commission, having worked in administration. Mrs. Savell worked as church secretary for a while and was active in square dancing and round dancing in numerous clubs. She was Grand Worthy Matron with the Eastern Star and benefactor of the arts, helping to support Ballet, Opera and the Symphony. Mrs. Savell loved working in her yard and raising roses. She is preceded in death by her parents, Benjamin Nicholas Speake and Nettie Merle Broome Speake; son, John Darrell Savell and sisters, Gaye McMurtray and Daisy Blackwell. Those left to cherish her memory are her two daughters, Cynthia Thompson of Kailua, HI and Darlene Chatham of Petal, MS; brother, John B. Speake (Bettye) of Speaks Rd; five grandchildren, Paige Ulcak (Chris), Nick Thompson (Kristen), Shawn Robinson, Candice Ellington (Jon) and Brendan Chatham; seven great grandchildren, Aubrey, Caymen, Carson, Scarlett, Bennett, Parker and Jaxon; and a host of friends. In lieu of flowers, donations may be made to the Gary Sinese Foundation at PO Box 368, Woodland Hills, CA 91365.
To order memorial trees or send flowers to the family in memory of Mrs. Alwilda Speake Savell, please visit our flower store.